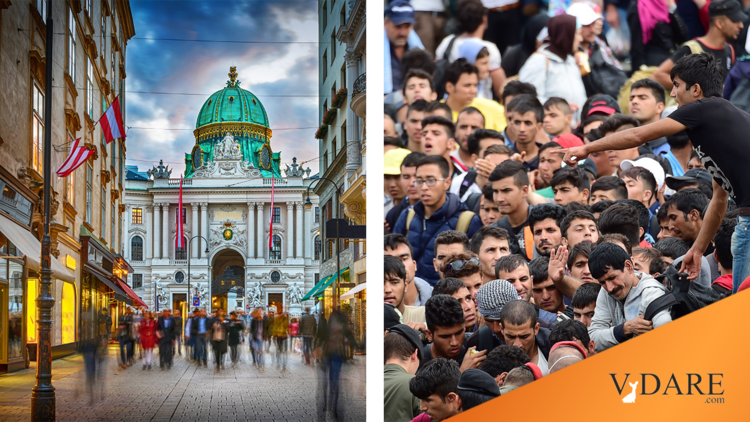 Austria and its center-right government is on the front line of fighting Islamic terrorism in Europe:

It is also not overly surprising that Austria has been hit. Beyond the cliché images of a placid Alpine country with a capital that regularly ranks first in the world’s quality of life rankings, in recent years Austria has faced high levels of jihadi radicalization.

Tellingly, the number of foreign fighters who left Austria to join the Islamic State (as many as 300) is one of the highest per capita in Europe. It is home to a large and sophisticated jihadi scene, historically created by Arab militants who have found refuge in Austria since the 1980s. A prominent product of this scene was Mohamed Mahmoud, the son of an Egyptian Muslim Brotherhood refugee in Vienna who started some of the first online jihadi platforms in German before joining the Islamic State in Syria and dying in a U.S. airstrike.

[Austria, Not France, Is the Model for Europe's Crackdown on Islamists, by Lorenzo Vidino, Foreign Policy, November 11, 2020]

Of course, the reason Austria has this problem is because it has imported a large Muslim population, the "sea" in which Islamic terrorists can swim, to use Mao's famous analogy. Thus, Austria now has the job of raiding organizations like the Muslim Brotherhood and being on almost permanent alert, with a hostile population within its own borders [Austria: Police raid Muslim Brotherhood, Hamas-linked targets, DW, November 9, 2020]. Interior Minister Karl Nehammer says these raids are also designed to "protect Muslims," but Muslims themselves may see it differently.

Thus, some Muslim activists are protesting what they call the Austrian (and French) government's "Islamophobia" and warn that such raids may inspire further extremism. Naturally, even non-Muslim activists feel there is something wrong with the government acting against a group which is essentially a protected class on the Continent.

I.R.I, who has led demonstrations against Egypt's military dictator Abdulfettah al-Sisi, said that words fail to describe the experiences of many Muslims detained with him that day.

I.R.I, who did not want his name to be disclosed because the investigation was ongoing, said that the police broke into their house early morning. They entered their bedrooms with long-barreled guns treating them like terrorists...

Austrian activist Michael Probsting said that the operation in which dozens of Muslims were detained is a clear indication of their determination to suppress religion and world views, which the government is dissatisfied with, as in France.

“Freedom of speech exists only for Charlie Hebdo and those who hate Islam. However, freedom of thought is denied to those who defend the rights of Muslims and who are against Islamophobic racism. It is a big scandal,” said Probsting.

“I am not a Muslim but it doesn’t matter. Muslims and non-Muslims should act together to defend basic democratic rights,” he added.

This Sisyphean task will never end. There will always be some extremist element within the Muslim community in Europe and so police will monitor them and occasionally raid their organizations. In turn, this will make that group feel like they are an enemy of the state and react against it. Political activists who would never defend the right of indigenous Europeans to speak out against their displacement on the Continent will naturally defend Muslims.

Muslims also have a political ally in Turkey, where President Erdogan is styling himself as a defender of Muslims within Europe [Erdogan highlights double-standards in treatment of Muslims and attacks, TRTWorld, November 3, 2020]. Combined with his neo-Ottoman pretensions, Turkey can intimidate a weak Europe. Erdogan scored a foreign policy triumph in the recent war between Azerbaijan and Armenia, where he openly backed the former while the West shamefully betrayed the latter, leading to a humiliating defeat for the world's first Christian state [Armenia, Azerbaijan and Russia sign Nagorno-Karabakh peace deal, BBC, November 10, 2020].

Austria and all Europe is facing a losing struggle unless they can forthrightly declare that Europe is for Europeans [Erdogan's 'Neo-Ottomanism' Reaches the Caucasus, by Salman Rafi Sheikh, New Eastern Outlook, October 29, 2020]. Of course, since Europe now defines itself by "secularism" and "liberal values," why should they care what happens to Armenia? Why should they care about what happens to their countries, which have essentially just become large shopping malls and tourist traps?

Erdogan offers a vision of strength and renewed empire; Europe cowers, and defines itself by its vices. Europe needs nationalism, not more timid liberalism. Unfortunately, the "conservative" Austrian government has already purged nationalists from its coalition, so there are few left with influence who can make that argument. Thus, this slow-motion defeat will roll on, even (perhaps especially) under "conservatives."