Why don’t we ever get nice straightforward polls like this in America? It would be a welcome change if Gallup or Rasmussen would ask whether we little citizens think the country is full, but no such honesty of inquiry has been forthcoming.

Australians think their country has enough people, and therefore the policy that allows the population growth should end.

Zero immigration. What a fine idea. 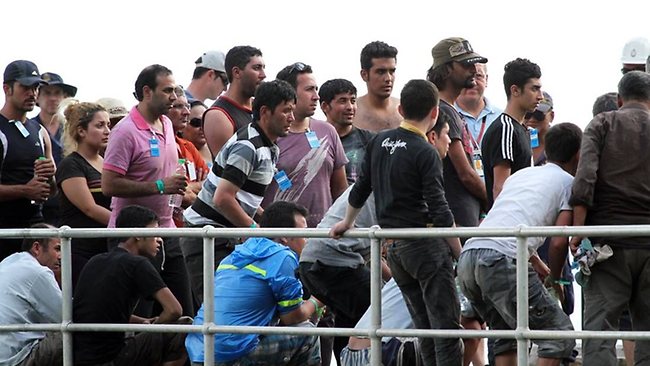 The tide of public opinion is turning against immigration, Sydney Daily Telegraph, May 22, 2012

MORE than half of Australians want our borders closed and immigration ended.

New research, provided exclusively to The Daily Telegraph, reveals a dramatic swing against border issues, with 51 per cent in favour of saying no to all migrants – a 10 per cent jump since 2005.

Fears over falling job security and the burgeoning population putting more strain on infrastructure are two reasons for the shift in attitudes. The federal opposition said yesterday the anti-immigration sentiment was due to rising public anger about the number of asylum seekers attempting to enter the country.

Just a third of the 2000 people questioned by Quantum Market Research for AustraliaSCAN believed overseas migration made Australia “a more interesting and exciting place”, down from almost half in 1995.

Almost two thirds said they believed migrants should try to “adopt the Australian way of life” when they arrived.

The number who believe the country has room to accommodate more people also plunged to less than a third, down from 42 per cent a decade ago.

“I think they are right to be worried, we have record levels of immigration and as a consequence we are allowing 100,000 migrants to enter the workforce at a time when employment growth is at a level lower than that,” Dr Birrell said.

“People are concerned that the present rate of population growth is not sustainable and is going to make Australia a poorer place to live rather than a better one.”

The government’s immigration and refugee program for 2012-13 is expected to reach a record 203,000 people, similar to the mass migration intakes of the 1960s.

“So long as Labor continue to crash confidence as a result of their failures on our borders, they will continue to crash community confidence in our immigration program,” he said. “That’s why the Coalition will reinstate proven border protection policies to stop the boats, getting our borders back under control and restoring the integrity in our immigration program.”

A spokesman for Immigration Minister Chris Bowen said migration had brought substantial economic and cultural benefits to Australia, but net overseas migration numbers had blown out under the Howard government due to an influx of low-skilled workers who abused the system.

“Our immigration reforms are delivering a sustainable level of migration, while responding to labour market needs,” he said.