How many kicks in the head will it take for western nations to learn that Muslim immigration is worst public policy ever?

Today’s example is the terror attack on a Sydney cafe where a couple dozen people were taken hostage by an Iranian, Man Haron Monis, who was accepted as a refugee in Australia in 1996.

Below, a hostage delivers a message from the terrorist that he was attacking Australia in the name of the Islamic State (ISIS):

The guy has a rap sheet filled with violence including dozens of sexual assaults on women through his spiritual ministrations as a sheikh and arranging the murder of his ex-wife. Why was such a violent man allowed to walk the streets? 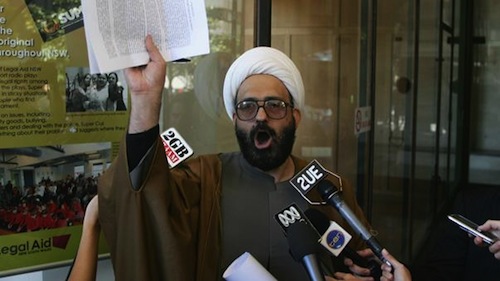 The spin coming out is that Monis is mentally disturbed, and he may well be from a western psychological viewpoint. But Islam encourages violence against infidels, and for that reason is attractive to the criminally minded.

For example, the Islamic prison ministry in this country has gained thousands of converts to the most radical form of the bellicose religion, like the Oklahoma prison convert who beheaded a co-worker in September.

Meanwhile, liberals were worried about backlash toward Allah’s gangsters at the same time that lives were being threatened:

Australians came out Monday in solidarity with the Muslim community following a siege at a Sydney cafe, as tens of thousands tweeted the hashtag #illridewithyou to counter concern about an anti-Islam backlash.

The hostage-taking at the Lindt chocolate cafe triggered a security lockdown in the heart of Australia’s biggest city, with the government and Muslim leaders condemning the attack and calling for unity.

Amid uncertainty about the hostage-taker’s motives and fears of reprisals after an Islamic flag was raised in the cafe, an Australian woman reportedly started the #illridewithyou hashtag to show solidarity with Muslims who might feel threatened on public transport.

The danger to the public would not exist if the government had not allowed thousands of Muslims to reside inside the gates.

Here’s a local report about the jihadist’s background:

Radical Muslim cleric Sheik Man Haron Monis has been revealed to be the ringleader in the Sydney cafe siege that has seen up to 30 people held hostage for more than 10 hours.

Monis was born Manteghi Bourjerdi and fled from Iran to Australia in 1996 where he changed his name to Man Haron Monis and assuming the title of Sheik Haron.

He has gained media attention in the past for a “hate mail” campaign, protesting the presence of Australian troops in Afghanistan.

The campaign saw him and his partner Amirah Droudis post hate-filled letters to the families of dead Australian soldiers.

The family of Brett Till, an Australian solder killed by a roadside bomb in 2009, was just one of the families who received a letter.

“We sat in our homes, reading these letters … This man accusing my husband of being a child killer,” widow Bree Till said at the time.

In November 2009 Monis appeared in court claiming to be a peace activist but later chained himself to the courthouse in protest of charges laid against him.

Monis escaped jail time but was sentenced to 300 hours of community service and placed on a two-year good behaviour bond in September 2013.

He again received attention from police in November last year when he allegedly organised the murder of ex-wife Noleen Pal.

Ms Pal had been stabbed and her body set alight in a Werrington apartment block, allegedly by Ms Droudis.

In April this year he was charged with sexually assaulting seven women while working as a spiritual healer in Wentworthville, where he claimed to be an expert in astrology, numerology, meditation and black magic.

In October Monis was charged with an extra 40 sexual offences relating to his work as a spiritual healer.

He is currently on bail and due to appear in court over indecent and sexual assault charges in February 2015.

Earlier this month Monis announced via his website he used to be a Rafidi, one who rejects legitimate Islamic authority and leadership, but “now I am a Muslim”.