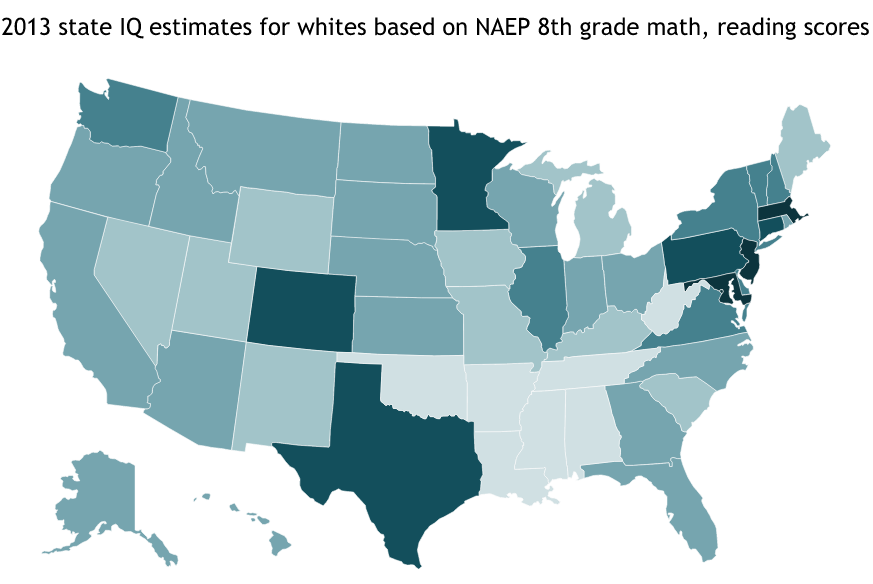 The darker the tint the better the 8th graders

Audacious Epigone has posted his table of white IQ estimates by state, using NAEP scores for 8th graders (public and private), ranging from 108.0 in Washington D.C. (which isn’t a state) and 104.4 in Massachusetts and 103.5 in New Jersey to 97.7 in Oklahoma, 97.5 in Alabama and a hurting 95.1 in West Virginia. Thus, New Jersey whites (who, Bruce Springsteen songs to the contrary, are a notably intelligent and well-educated white population) scores 0.4 standard deviations higher than Alabama whites.

Moynihan’s Law of the Canadian Border is still vaguely visible, but is much less strong for whites only than for total populations (which is of course most of the joke). Texas, of course, stands out sharply from the central southern states.

Of course, some of the differences in test scores don’t reflect underlying IQ but are instead reflections of different effectivenesses at educations and, presumably, at how hard different states get their students to try on the NAEP.

You can read his whole table there.