Over the last several months the Democrats have quietly put into place a winning electoral strategy—running moderate white men. Those moderate white men in Virginia, Alabama, and Pennsylvania sound nothing like their colleagues in California.

Celebrating the dispossession of white Americans by illegal alien invaders comes naturally to someone like Kevin de Leon, who cut his political teeth as a community organizer organizing against Proposition 187, the judicial snuffing out of which sealed California's fate as majority non-white and thus forever blue.

It's an acquired taste for guys like Northam, Jones, and Lamb, though. Inexplicably, Jones and Lamb were able to avoid saying just about anything at all about immigration, and Northam only had to fend off a couple hail Mary immigration ads by bugman Gillespie, whose heart was never in it anyway.

A Reuters-Ipsos poll conducted last Fall—one that unsurprisingly never made the site's topline—provides the GOP with some very low-hanging fruit to pick ahead of the 2018 mid-terms. The following graph shows the percentages of respondents, by selected demographic characteristics, who think illegal immigration either poses "no threat" or a "minimal threat" to the United States (N = 2,383; other possible responses were a "moderate threat", a "serious threat", and an "imminent "threat; "not sure" responses are excluded): 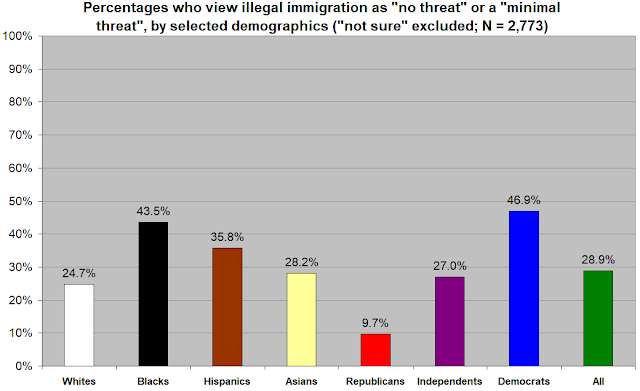 Republicans, ask your opponents exactly this—"Do you think illegal immigration is a threat to our country?" 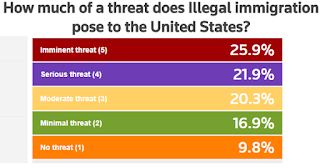 Demand an answer. Outside of California, it's a devastating no-win question for Democrats to face. The invaders will tear Nancy Pelosi to pieces for not displaying sufficient zealotry in her desire to throw the doors open to all the beautiful brown skins and brown eyes in Latin America. How will these same invaders react to a pale white male who says their invasion is a threat? DACA, which would be dead now if not for the country's treasonous judiciary, contained the answer.

Our champions have flipped out over Trump appearing set to give the game away on multiple fronts—the biggest ones being immigration and guns. In both cases, Trump will end up doing the right thing.

Playing the role our champions have to keep him honest—and also to allow the tactical gambit to work—is laudable, but perhaps we can be more sanguine about these instances. Trump knows elected Democrats cannot go along with him on anything at all without their non-white base going berserk. The more accommodating and reasonable the president appears—while praetorian prefect Stephen Miller guides actual policy decisions—the more appealing Trumpism becomes to white independents and Democrats.

Everything is downstream of immigration. Not only is it the only issue that really matters, though, it's also a populist one where the optics favor Republicans. That the Stupid Party doesn't make every election about it—like, say, Donald Trump did—is why they continue to earn their Stupid Party moniker.