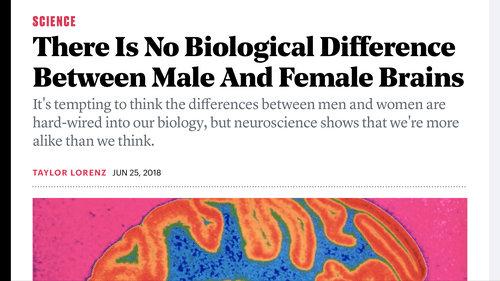 ATLANTIC: "There Is No Biological Difference Between Male and Female Brains"

There Is No Biological Difference Between Male And Female Brains

It’s tempting to think the differences between men and women are hard-wired into our biology, but neuroscience shows that we’re more alike than we think.

But according to Lise Eliot, a professor of neuroscience at the Chicago Medical School and the author of Pink Brain, Blue Brain, anyone who goes searching for innate differences between the sexes won’t find them.

“People say men are from Mars and women are from Venus, but the brain is a unisex organ. We have the exact same structures,” she said onstage Monday at the Aspen Ideas Festival, which is co-hosted by the Aspen Institute and The Atlantic.“There is absolutely no difference between male and female brains.” …

TAYLOR LORENZ is a staff writer at The Atlantic, where she covers technology.

A suggestion for The Atlantic’s editor Jeffrey Goldberg: You got your hands on a grand old brand name — the founders of The Atlantic Monthly included Ralph Waldo Emerson, Oliver Wendell Holmes, Sr., Henry Wadsworth Longfellow, Harriet Beecher Stowe, and John Greenleaf Whittier — and now you’ve got the Widow Jobs’ money behind you.

So knock it off with all the clickbait bimbos. Hire some grown-ups who have a lick of sense so they don’t embarrass the brand like this.