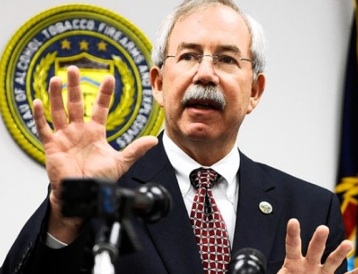 A couple weeks ago, the mainstream press reported that the acting head of ATF, Kenneth Melson (pictured), was about to resign, given the worsening Gunrunner scandal in which his agency purposely allowed thousands of guns to be sent to Mexican organized crime in order to track them.

Now it turns out that Melson was not willing to take the fall, and has been speaking with Rep. Darrell Issa and Sen. Charles Grassley, the two leaders pursuing the case. Rep. Issa had previous called for Melson’s resignation, but he has reversed that position since Melson has become more cooperative to the investigation.

Another news item in the case is that the FBI was involved in the so-called ”sting” operation, unbeknownst to the ATF. Acting Director Melman alleged (according to the Grassley letter) that the Justice Department had kept the ATF in the dark regarding the activities of other agencies, which was both inefficient and confusing.

As Grassley wrote, ”Specifically, we have very real indications from several sources that some of the gun trafficking ”higher-ups” that the ATF sought to identify were already known to other agencies and may even have been paid as informants.”

That’s no way to run a law enforcement department, and it speaks poorly of the improved inter-agency communication the nation was promised after the 9/11 terror attacks.

Additionally concerning is how high the Justice Department cover-up goes – although it is hard to imagine that permission for a cross-border operation wouldn’t go at least to the top of the agency.

The Justice Department is obstructing the congressional investigation of a U.S. law enforcement operation intended to crack down on major weapons traffickers on the Southwest border, according to the embattled leader of the Bureau of Alcohol, Tobacco, Firearms and Explosives.

Ken Melson, the acting director of the ATF, lobbed the accusation when he sneaked in for an interview with congressional investigators on July 4, two days ahead of his scheduled interview with the inspector general about the operation known as ”Fast and Furious,” Fox News has learned.

”If his account is accurate, then ATF leadership appears to have been effectively muzzled while the DOJ sent over false denials and buried its head in the sand,” Rep. Darrell Issa, chairman of the Oversight and Government Reform Committee, said in a letter Tuesday to Attorney General Eric Holder. ”That approach distorted the truth and obstructed our investigation.”

The Justice Department is reportedly looking to oust Melson, who has been acting ATF director since April 2009, as the agency deals with its biggest scandal in nearly two decades. Andrew Traver, who was tapped in November by President Obama to become the permanent ATF director, could be named as acting director until the Senate acts on his nomination, sources have said.

In a separate development, congressional sources have learned that not only was U.S. taxpayer money being used to buy guns that were later sent to Mexico, but the main target of the investigation was actually a FBI informant and former drug dealer who had been deported years ago.

”Fast and Furious” has been at the center of an investigation by Issa and Sen. Charles Grassley, R-Iowa. The operation began in the fall of 2009 as an effort to trace and stop the trafficking of illegal guns on the Southwest border, but instead allowed thousands of guns to get into the hands of Mexican cartel members.

The two say they learned about the program after Border Patrol Agent Brian Terry was killed in December 2010. At the crime scene were two guns linked to the ”Fast and Furious” operation.

At an Oversight and Government Reform Committee hearing last month, three federal firearms investigators testified that they wanted to ”intervene and interdict” loads of guns, but were repeatedly ordered to step aside to allow suspected smugglers to carry the weapons over the border.

Issa and Grassley have urged Holder to cooperate and turn over subpoenaed records that would reveal the scope of the government coverup.

According to sources, unbeknown to the ATF, the target of their operation was a FBI confidential informant, a fact that only became known to them in April of this year after an 18-month investigation that cost millions of dollars of tax dollars.

”They were going after someone they could never have,” a source in Washington told Fox News. ”The Mr. Big they wanted was using government money to buy guns that went to the cartels. The FBI knew it and didn’t tell them.”

The confidential informant is a former high-level drug dealer who had been deported by the DEA. The FBI, however, recruited him as a counter-terrorism informant, providing information on potential dirty bombs or Al Qaeda suspects moving through the border region.

The FBI informant was picked up on a DEA wiretap, and forwarded to the ATF.