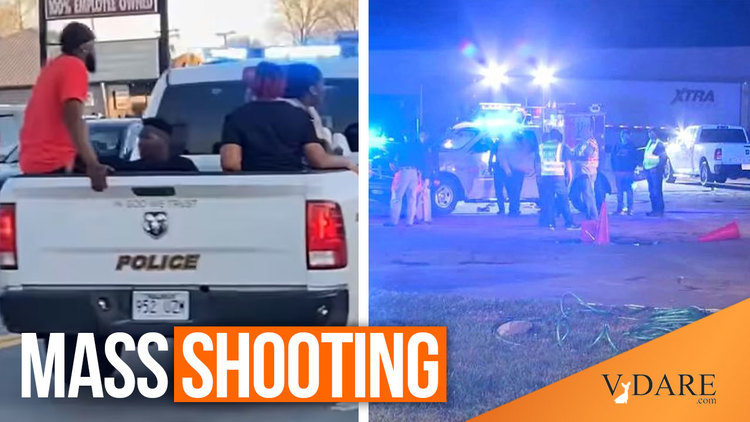 Why does the Second Amendment apply to Africans in America?

Hint: it originally didn’t. Nor should it. Including an event in Arkansas, where 27 black were shot and one black person is dead courtesy of mass shooting event by a black individual(s) at The Hood-Nic Foundation event.

The victim was identified as Cameron Shaffer, 23. He was one of 28 victims of the shooting that occurred at a parking lot at 611 U.S. 65 South, outside the old Fred’s store on the highway that goes through the center of town.

The car show was held as part of the three-day Hood-Nic 2022 festival in the city, an organizer confirmed.

The investigation is ongoing, Bryant said, adding there was no indication Shaffer was one of the involved persons in the confrontation that led to the shooting. Two individuals were involved in a gunfight, and state and local police are looking for one suspect with the possibility of another.

Dumas police responded to a call of the shooting at 6:50 p.m. Saturday and contacted state police for assistance, Bryant said. Dumas police arrested one person “who fit the general description” of a suspect and left the scene of the incident, but the charges were unrelated, Bryant said.

The suspect or suspects would be identified publicly once they are formally charged, Bryant said.

The number of victims rose for the second time in less than 24 hours from the initial report of the shooting, when it was reported up to 10 were wounded. Five children — ages 11, 9, 8, 23 months and 19 months — were treated and released at Arkansas Children’s Hospital in Little Rock, Bryant said.

Nelson Kimble, 58, of Pine Bluff said his wife, Felecia, 53, and their grandson, the 19-month-old whom Kimble declined to name, were wounded. Felecia Kimble and the grandson remain hospitalized in Little Rock, both in stable condition, Nelson Kimble said.

Felecia Kimble shielded their grandson against her stomach when shots rang out, taking a bullet that went through the boy’s leg to her liver, Nelson Kimble said.

Nelson Kimble is the lead singer of the Platinum Hits Party Band, which was performing at Hood-Nic.

Felecia Kimble and three of their 19 grandchildren went to get funnel cake when shots rang out.

Nelson and Felecia Kimble’s 11th wedding anniversary is March 26. They had planned to head to a vacation house in Dallas that weekend.

“This just goes to show there are demons still in the world,” Nelson Kimble said. “We’ve got to stay prayed up.”

As he returned home from Little Rock, Nelson Kimble took a look at the “shield God put on” his wife — a waistband she wore to support her stomach, he said. The bullet burned her skin, he added.

State police are taking the lead in the investigation, with assistance from Dumas police, the Desha County sheriff’s office and local prosecutors.

Kris Love-Keys, chief development officer of Hood-Nic, was not at the car show but reported someone in the crowd started firing at the beginning of the show. A motive has not yet been revealed.

“A big part of Hood-Nic has been to bring about unity and prevent incidents like this,” Love-Keys said. “This was the 16th year of the event, and there had never been an incident like this.”

Hood-Nic is an annual three-day festival that began with a bonfire Thursday at Pickett Park, continued with a basketball tournament and teen party, among other events, on Friday and concluded with a full day of activities including a parade Saturday, according to an itinerary for the festival on Facebook.

Pine Bluff resident Twynette Thornton, a security guard at the car show, said she and another person had left their duties for the evening and were sitting down when they heard gunshots. Thornton said she didn’t know what led to the gunfire.

“The kids who were shot passed by us when they were carried by adults, but I don’t know if they were the parents or just bystanders,” Thornton said. “There was fast reaction from police and EMS. They were there quickly.”

Amberly R. Taylor, who resides in Oklahoma City, was in Dumas to see her son Nicholas Elijah Evans receive an award during the festival. Nicholas, 13, is a musical artist and political speaker who lives in Lake Village, Taylor said.

“We left the event two minutes before everything started happening, and we were back two minutes afterward,” Taylor said. “My youngest son did not want to stay. He’s 11 and he just has that gift of knowing when something is about to happen. When God tells you to move, you move.”

Taylor recalled seeing a “community member” shielding another person after the shots were fired, as the peace of a small-town celebration was disrupted by violence.

“It was a beautiful vibe, very family-oriented,” Taylor said. “It was a peaceful gathering until it wasn’t. I’m completely baffled as to why the shots were fired so fast. It seems like somebody walked in and did something horrible and then walked out.”

Hood-Nic offered something for the children, Thornton said, adding no one could predict the evening would turn tragic.

Chris Jones, a Democratic candidate for governor originally from Pine Bluff, issued a statement overnight on Twitter, saying he was “heartbroken” about the mass shooting.

“I attended the event earlier in the day,” Jones said. “We registered voters, enjoyed good music and celebrated a positive family environment. I saw old friends and met many new ones.

“I am deeply saddened (and honestly angered) by this tragedy.

“Dumas needs our thoughts, our prayers — and our action. Join me in praying for the victims, their families, the first responders and the entire Dumas community.”

Sarah Huckabee Sanders, a Republican gubernatorial candidate, posted on Twitter as she retweeted a television report:

“Prayers for the community of Dumas for the senseless and tragic shooting at a community event [Saturday] night. Thankful for our law enforcement and first responders for their actions during this difficult time.”

The Hood-Nic Foundation posted a form on the splash page of its website asking victims how they were impacted by the shooting and how organizers can help. The page posted information for those who would like to help support the victims.

The stress Nelson Kimble endured in the hours since a “beautiful” day went wrong was unnecessary, he said.

“We shouldn’t be stressed. We should be happy,” he said. “The devil had to step in and show his colors. But we won’t let him have his joy. We’re going to continue to support the kids as best as we can.”

How many stereotypes did the Hood Nic Foundation event over March 18th-20th confirm, where 28 black people were shot in a mass shooting by a black individual?

At the Hood Nic Foundation event…

It’s all such a joke.