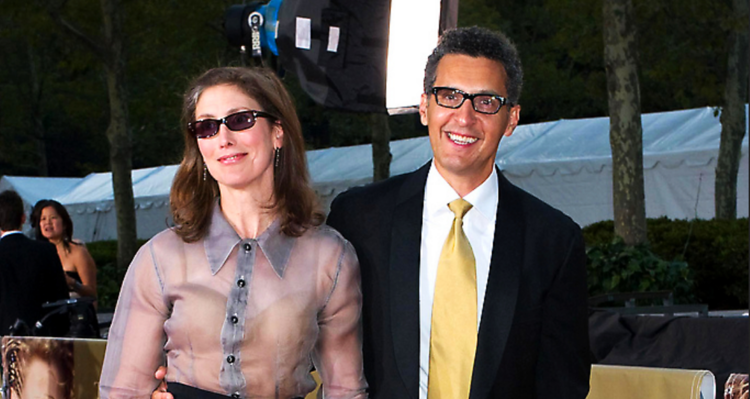 Here's an economics paper by Gustaf Bruze on assortative mating among movie stars: "Marriage Choices of Movie Stars: Does Spouses' Education Matter?" He looked at the top 400 movie stars in 2006 by "bankability" and then tracked down education levels for 140 of the stars and their spouses who are well enough known to have biographical data readily available on them. He finds a moderate level of correlation — 0.40 — between spouses' years of education. Movie stars have a lot of options in whom to marry and are seldom married to their school sweethearts, so this is a modestly interesting test affirming that like tends to attracts like.

Indeed, the correlation would probably be higher except that movie stars tend to drop out of school because it's too hard less often than other people and more often because they've got something better to do with their time (like being a movie star).

Here are the couples with 19 years of education each (with the celebrity designated with an asterisk).

Giamatti's father was a Dante scholar who was appointed president of Yale before becoming the baseball commissioner.

Meryl Streep and Sigourney Weaver got their last three years of formal education together at the Yale Drama School in New York, much to Weaver's regret. Like quarterback Steve Young stuck on the bench behind Joe Montana, Weaver constantly lost starring roles at Yale to Streep, in part because Streep is just a few inches above average in height while Weaver is taller than most men, even without wearing heels. That's a bigger problem on stage than in film.

(Streep and Weaver are rare cases of movie stars who went through a long stretch of professional education. Both were born in 1949 and didn't get their first film roles until 1977, with Streep instantly becoming a star with Julia, while Weaver became a star in 1979 as Ripley in Alien. That's kind of the standard upper middle class life cycle model these days — invest heavily in accredited education up through about age 25. It worked fine for Streep, who was a legend before she ever set foot on a movie set, and it worked out well for Weaver, although she (a Stanford English major) has had to put up with sci-fi nerds her whole career. But it doesn't seem to work very well for movie stars in general.)

Spike Lee is a third generation graduate of Morehouse. The couple with the least years of education is Nicole Kidman (11) and country singer Keith Urban (9.5).

The biggest gaps between the 140 couples are around a half dozen years. Dustin Hoffman and Morgan Freeman have six years less education than their less-well known wives, while TV writer David Kelley has six more years than Michelle Pfeiffer. Alfred Molina has six more years of schooling than his wife, an actress turned novelist, who is 16 years older than him.

Among male celebrities, the least educated include, unsurprisingly, the great elderly British working class stars Sean Connery (9.5 years — he never owned a business suit until he got the role of James Bond, so he slept in a suit to learn to feel comfortable in it) and Michael Caine (10 years). Also at the bottom of the list at 9.5 years is aristocrat / director Guy Ritchie. I presume he got kicked out a lot of posh schools.