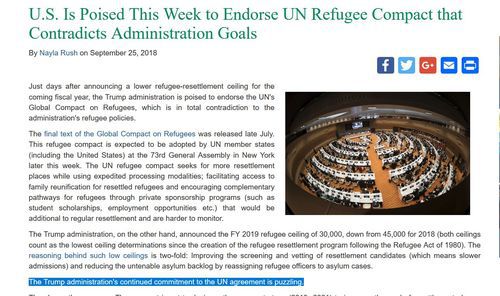 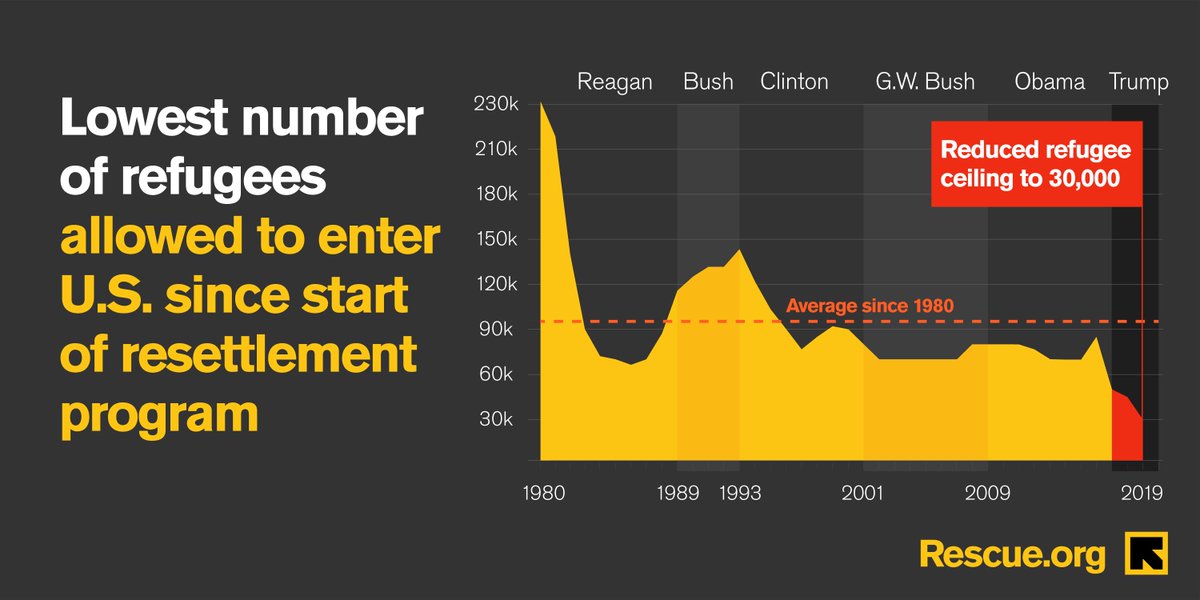 Trump spoke today against globalism in the UN, and has slashed refugee admissions more than any President since 1980. The Council On Foreign Relations is unhappy, the International Rescue Committee is unhappy, but Trump voters are happy.

Despite that, the Center For Immigration Studies reports that

The final text of the Global Compact on Refugees was released late July. This refugee compact is expected to be adopted by UN member states (including the United States) at the 73rd General Assembly in New York later this week. The UN refugee compact seeks for more resettlement places while using expedited processing modalities; facilitating access to family reunification for resettled refugees and encouraging complementary pathways for refugees through private sponsorship programs (such as student scholarships, employment opportunities etc.) that would be additional to regular resettlement and are harder to monitor.

The Trump administration, on the other hand, announced the FY 2019 refugee ceiling of 30,000, down from 45,000 for 2018 (both ceilings count as the lowest ceiling determinations since the creation of the refugee resettlement program following the Refugee Act of 1980). The reasoning behind such low ceilings is two-fold: improving the screening and vetting of resettlement candidates (which means slower admissions) and reducing the untenable asylum backlog by reassigning refugee officers to asylum cases.

The Trump administration's continued commitment to the UN agreement is puzzling.

This is a story George Shultz, who was Secretary of State in the Reagan Administration, told to Brian Lamb on C-Span's Booknotes:

SHULTZ: Oh, no, I think that the important things are all there. There's one incident that somehow or other is not in there, and I don't know why it got left out. But it's an interesting thing that happened. When I was — in the first period when I was secretary of state, there was in my office a big globe. And when ambassadors, who were newly going to their posts or in their posts and coming back to visit me, would get ready to leave, I would say to them, "Ambassador, you have one more test before you can go to your post. You have to go over to the globe and prove to me that you can identify your country." So unerringly, they would go over and they'd spin the globe around and they'd put their finger on the country they were going to, pass the test.

So Mike Mansfield, great elder statesman in America, former Senate majority leader and who had been ambassador to Japan for a while before I was there, and he was a close friend of mine from back when I was in the Nixon administration — so he was visiting and he got ready to leave. I said, "Mike, I got to give you the same test I give everybody else. Before you can go back to Japan, you got to show me that you can go over to the globe and put your finger on your country." So he went over and he spun this globe around and he put his hand on the United States, said, "That's my country."

So I've told that, subsequently, to all the ambassadors going out, "Never forget, you're over there in that country, but your country is the United States. You're there to represent us. Take care of our interests and never forget it, and you're representing the best country in the world."

When I blogged about that in 2010, I wrote "Query: do you suppose that test will be popular in the Obama Administration?" The problem is that it's not likely to be that popular with  staffers in the Trump Administration either.