Arizona Law Defended in the Courts and on the Streets

Your humble correspondent attended the Ninth Circuit Court in San Francisco Monday morning for the federal government’s continuing suit against the state of Arizona’s tough immigration law. As a non-lawyer, I found the proceedings interesting, although somewhat mysterious, given all the legalistic shorthand referring to previous cases and numbers of sections within the Arizona law in question.

A three-judge panel of the Ninth U.S. Circuit Court of Appeals indicated that it would authorize police to demand papers from those they reasonably suspected of being in the country illegally, but would not allow authorities to arrest or prosecute them under state law.

That would still allow suspects to be referred to U.S. authorities for deportation, however.

What good is the law if officers cannot arrest the bad guys?

When I spoke with Arizona State Senator Russell Pearce after the proceeding, he thought that the court sounded split over the four provisions being contested; i.e. would okay two but were negative toward two others. At any rate, he was convinced the law would end up in the Supreme Court. No surprise there.

As Senator Pearce has pointed out again and again, ”It is the first time in the history of the United States a sitting President has sided with a foreign government” – Mexico in particular, although many Latin countries filed briefs against Arizona and American sovereignty. One court watcher recently declared, ”Mexico is very upset about this law.” No doubt it is.

While I was inside quietly immersing my mind with legal principles, a large mob of open-borders troublemakers arrived and closed down the street in front of the courthouse with their shenanigans. My friend and colleague Rick Oltman described the motley scene: SB 1070, the 9th Circus, patriots, anarchists… all the usual suspects, SF Examiner Blog, Nov 2, 2010.

(The photos below are my own, except where noted.)

Fortunately, there were border patriots there to oppose the thugsters. Ray Herrera and Robin Hvidston drove all the way from southern California to support Arizona, and dozens of local folks were in attendance, such as the Golden Gate Minutemen. Below is Ray with Senator Pearce and Rick Oltman: 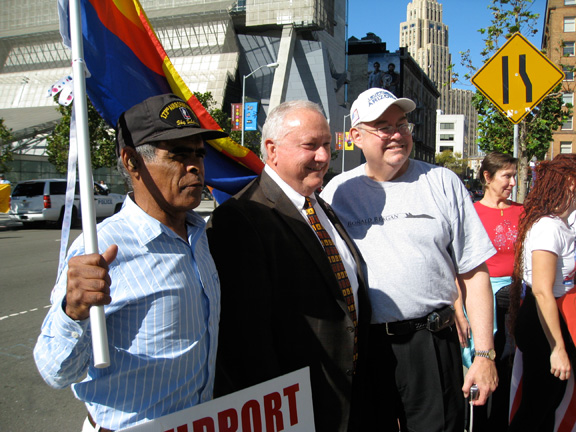 Ray got into a disagreement with a Raza anarchist, as caught by AP: 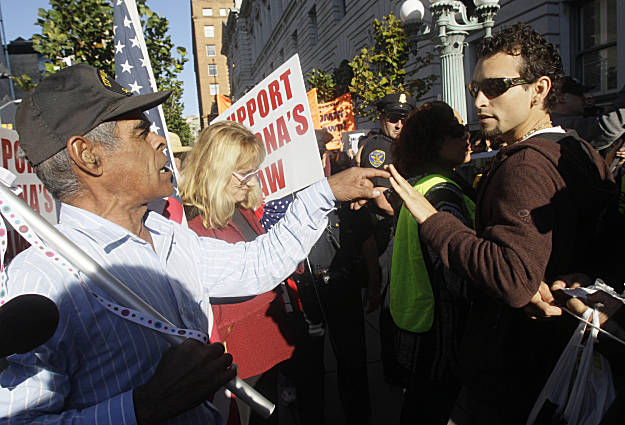 I noticed a lot of kids present for 11 am Monday morning. I asked one blonde boy why so many kids were there, and he said it was a project from King Middle School in Berkeley. What’s up with that? Training little Raza Marxists?

(Speaking of indoctrinating children, I was privileged to meet School Superintendent Tom Horne – who is running for Arizona Attorney General – on the courthouse steps, who shut down the Tucson schools’ ”ethnic studies” scam, which brainwashed hispanic kids with treasonous Raza propaganda about American evil BS, on the taxpayer’s dime. See my May blog, Raza Racists Angered at Arizona’s Ethnic Studies Prohibitions.)

Below are some of the kids indoctrinated into anti-borders ideology. 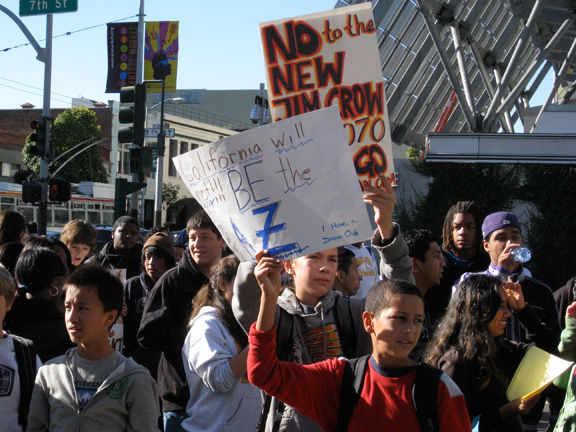 Rick Oltman got a lot of attention with his Bite Me flag, including being photographed by the Associated Press, below. (If you want a similar flag or other items with that cool design, definitely check out Arizona Bite Me for the real stuff.) 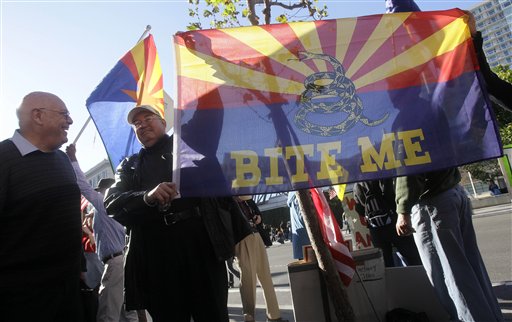 There were plenty of glouligans present, which I thought wasn’t a terribly attractive way to show up, and then I remembered that Nov 1 is the Day of the Dead for Mexicans, so it was a diversity thing. (Feeling culturally enriched yet?) 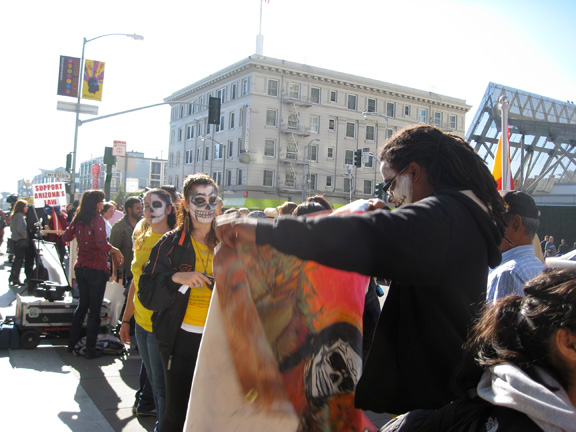 What’s a Raza rally without a big-feathered guy who fancies himself a new Aztec? Fortunately, no sacrifices were forthcoming.

Oh, and religious types were there in abundance. They are the delusionaries who believe their dreamy trust in pursuing open borders makes them more virtuous than defenders of law and sovereignty. Peace and love! One world! 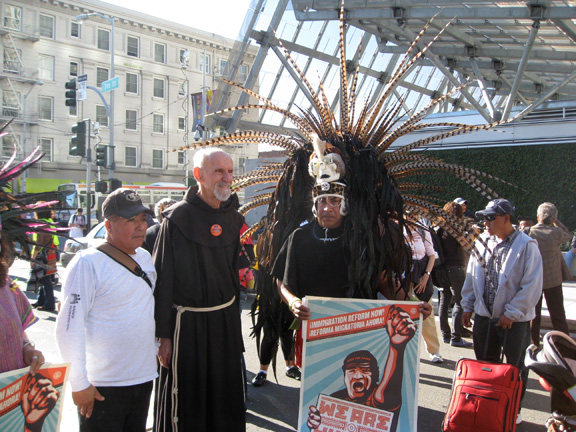 Below is a photo taken of pro-borders demonstrators taken after many people had left, so it understates the number of friends of American sovereignty, who were outnumbered several-fold by seditionists throughout the morning. However, a credible statement was made, particularly in loony-left San Francisco. 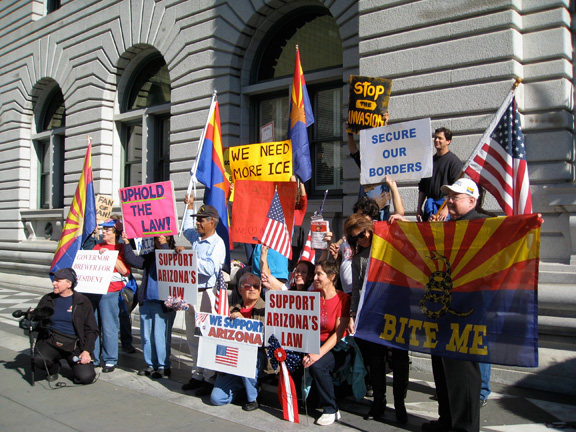