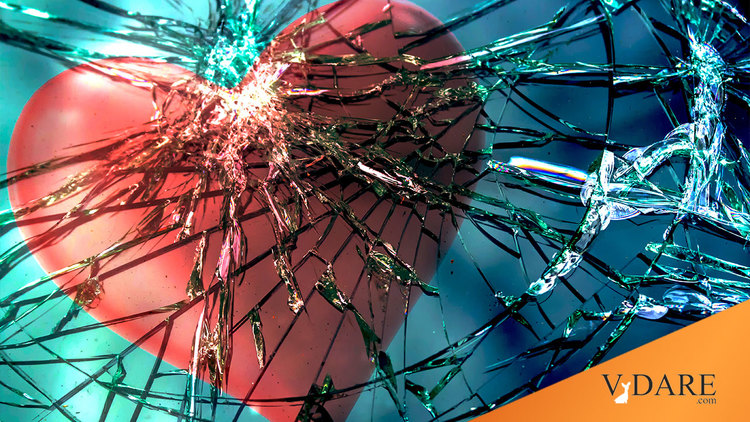 Are Multiracial Societies Physically Painful to Live In?

I've long had a suspicion that life in a multiracial society isn't just confusing and inefficient: it might actually be mentally and physically harmful. Why? Robert Putnam observed that people in multiracial societies are distrustful not only of other racial and ethnic groups, but also members of their own race or ethnicity.[Robert Putnam: Diversity Is Our Destruction, By Patrick J. Buchanan, August 09, 2007]

This is an obvious recipe for stress, anxiety and depression. And countless studies seem to support the idea that healthy human relationships outstrip even exercise and healthy diet as key factors in our health (in other words, a person with a loving spouse and close friends—and a few extra pounds—may end up living longer than a trim but friendless person).

(Having been dumped by a girl I thought was perfect for me, I can testify.)

"[Researcher Ethan] Kross suspects we've evolved to feel actual pain at separation because way back when humans were on the savannah, they needed to stay connected," wrote Linda Carroll of the study on MSN.com. "Being alone was dangerous – you'd be more of a target for the wandering saber-toothed tiger." "One of the most negative things to happen, in terms of survival, is being excluded from the group," Kross told her. "So the feeling of physical pain would be a powerful cue to pay attention to what you're doing."

And as someone who spent a year working in the Bronx (28 percent white and dropping), let me testify further: I was not connected with the black and Hispanic folks who teemed around me. I felt as lonely and isolated as I've ever felt in my life. I was a target for the wandering saber-toothed tiger.

Now, romantic rejection may be more acute—to channel Richard Dawkins, romantic rejection means you're missing the chance to pass on your genes (ouch). But I think the principle likely applies more broadly: surrounded by those who empathize more with you—a phenomenon enhanced by genetic or ethnic kinship—you're happier, healthier, and less stressed.

I'm confident that if it were legal for scientists to research this, my theories would be vindicated.