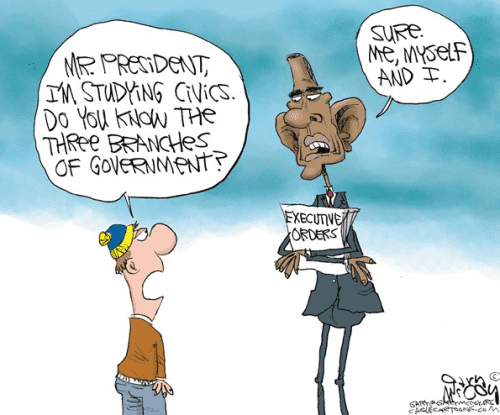 The decision seemed long in coming since Texas Judge Andrew Hanen’s original opinion, but it is very welcome in drawing a line showing that the Constitution still is respected in the United States.

Twenty-six states challenged the right of the President to unilaterally amnesty millions of illegal aliens. After all, the Constitution mandates that the Congress makes the laws and the President executes them. That was the idea of the founders anyway.

Interestingly, the press framed the story according to their immigration position. The Los Angeles Times showed its bias with its front-page print headline “Blow is dealt to migrant plans” while the Washington Times heading simply read “Obama’s amnesty plan loses in court.”

Still, it’s not like federal agents will now swing into action to deport the five million unlawful foreigners amnestied. The Obama administration routinely releases illegal alien murderers, rapists and drunk drivers, so the un-amnestied persons who merely steal American jobs have little to worry about regarding enforcement.

Below is an early report from Fox News with an interesting chat between two lawyers:

MEGYN KELLY: The president’s immigration executive action takes a real hit. In a two-to-one decision, the Fifth Circuit Court of Appeals has ruled against the administration’s actions, upholding a lower court injunction against those executive actions that have been issued by a judge down in Texas. Judge Andrew Napolitano’ is our Fox News senior judicial analyst.

So this is the ruling, it’s a biggie and it’s true there is a dissenter but the president has lost and what does this mean?

ANDREW NAPOLITANO: It means that a federal judge in Texas who enjoined the president — signed an order preventing the president from implementing his executive order which effectively changed the immigration laws — that injunction has now been made permanent by a federal appeals court. So the three judges — the trial judge and two appeals court judges — have used their authority under the Constitution to stop the president from writing his own law. They all agreed that that’s what he was attempting to do.

KELLY: So they agreed with the original 25 statements by Barack Obama that he did not have the authority to offer greater executive actions when it comes to illegal immigrants.

NAPOLITANO: Yes. It also agreed with the plaintiffs here which are 25 of the 50 states led by the state of Texas, originally filed by then-Attorney-General now Governor Greg Abbott, demonstrated that if the president’s executive order were to be carried out, the financial damage to those states, forcing them to spend money that they hadn’t taxed for and hadn’t budgeted, the basic welfare benefits to the people the president was going to let stay here, legally in the president’s view, that that would be a catastrophic injury to the states and therefore they had the right to bring this case.

KELLY: Because the Obama administration had been in there trying to argue to the courts, you can’t even let these states object. They have no standing to even be here: we are God and we get to decide with the stroke of a pen what the immigration situation will be.

NAPOLITANO: Megyn, the Justice Department’s argument was even more over the top than that. They argue that the president had such discretion — they wouldn’t say where the discretion came from — that it was not even challengeable in a court. That of course was rejected by these gentlemen.

KELLY: What a reversal from all the on-camera statements by Barack Obama himself, the president United States repeatedly saying, I don’t have the authority, I’m not god, this isn’t a kingdom, I can’t do it, and then of course as we now all know, about this time last year, about 12 months ago, he reversed himself.

NAPOLITANO: He rewrote the immigration laws. Listen, he may have had a noble motivation in doing this, but the Congress expressly rejected what he wrote. The Congress established a very very detailed administrative set-up for people becoming citizens.

KELLY: It’s not like they hadn’t taken a look at this and said no, we the people reject your plan. He couldn’t get it through and after he didn’t have the authority he claimed the authority and now these judges have said you’re right the first time.

NAPOLITANO: This is very very rare that a single judge would enjoin the president and that judge would be upheld by an appeals court. He has one option left — that’s the Supreme Court of the United States in the middle of a very busy term that’s already been planned.

The Fifth Circuit Court of Appeals issued a ruling on Monday evening effectively putting a halt to President Barack Obama’s executive amnesty program. Texas and 26 other states joined in the lawsuit to block the Administration’s illegal action.

“The court’s decision is a vindication for the Rule of Law and the Constitution,” said Texas Governor Abbott in a statement obtained by Breitbart Texas. Abbott initially filed the lawsuit in 2014 duing his final months as Texas’ Attorney General. “The President’s job is to enforce the immigration laws, not rewrite them. President Obama should abandon his lawless executive amnesty program and start enforcing the law today.”

Judge Hanen initially wrote: “The ultimate question before the Court is: Do the laws of the United States, including the Constitution, give the Secretary of Homeland Security (DHS) the power to take the action at issue in this case?”

Breitbart Texas reported that the judge laid out three issues to answer in this ruling: “(1) whether the States have standing to bring this case; (2) whether the DHS has the necessary discretion to institute the DAPA (Deferred Action for Parents of Americans and Lawful Permanent Residents) program; and (3) whether the DAPA program is constitutional, comports with existing laws, and was legally adopted.”

The Fifth Circuit held, “Reviewing the district court’s order for abuse of discretion, we affirm the preliminary injunction because the states have standing; they have established a substantial likelihood of success on the merits of their procedural and substantive APA claims; and they have satisfied the other elements required for an injunction.”

“Today, the Fifth Circuit asserted that the separation of powers remains the law of the land, and the president must follow the rule of law, just like everybody else,” Texas Attorney General Ken Paxton said in a statement obtained Monday night by Breitbart Texas. “Throughout this process, the Obama Administration has aggressively disregarded the constitutional limits on executive power, and Texas, leading a charge of 26 states, has secured an important victory to put a halt to the president’s lawlessness.”

“I commend Gov. Abbott for his leadership on this issue,” Paxton continued, “as well as the talent and hard work of Texas Solicitor General Scott Keller, who along with his team has so eloquently and expertly argued our case.”

Breitbart Texas legal analyst Lana Shadwick reported in July that Keller argued on behalf of the states in front of the Fifth Circuit on July 10.

As President Obama said himself shortly after announcing the program, he “took an action to change the law” when he signed the executive action on immigration. Texas has argued that any sweeping change in immigration policy should be up to lawmakers, not the unilateral action of the executive branch.

The Fifth Circuit upheld the preliminary injunction granted by the U.S. District Court for the Southern District of Texas on February 16.