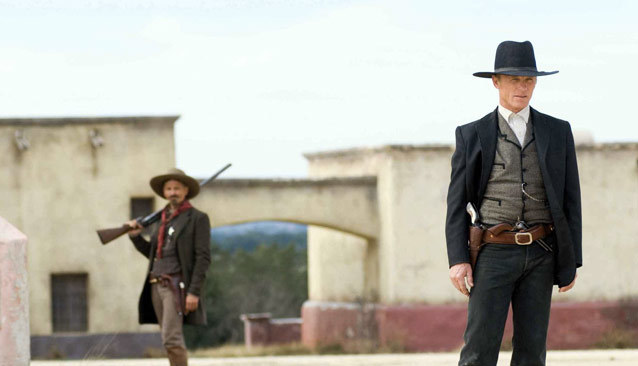 A movie likely to be overlooked in the Oscar nominations is the fall cowboy flick, "Appaloosa," but Viggo Mortensen deserves serious Best Supporting Actor consideration. Here's my review in The American Conservative:

The bald and square-jawed actor Ed Harris has played American heroes and psycho killers since first drawing notice as astronaut John Glenn in 1983's "The Right Stuff." He's now written and directed "Appaloosa," an amiable Western about masculine camaraderie and honor adapted from the book by Robert B. Parker, the genre novelist who created Spenser, the Boston private eye. "Appaloosa" furnishes Harris and Viggo Mortensen (the King in "The Return of the King") with plenty of wry lines for their portrayals of itinerant lawmen in the New Mexico of the 1880s.

Fish do not feel wet, we are told (although on what authority, I cannot say), and cowboys and Indians movies once felt no more awkward than cops and robbers films do today. Westerns were then less a genre than a natural, default mode. In the early 1970s, however, urban crime dramas, such as "The French Connection" and "The Godfather" replaced Westerns as the norm. The Western has since become a highly self-conscious genre, one almost immobilized by the weight of its pre-1970 cinema history.

As an actor, however, Harris appears unburdened by all the film school baggage the genre has accumulated. The straightforward "Appaloosa" provides two outstanding roles and sundry old-fashioned pleasures.

By churning out countless cowboy movies, Hollywood had helped enshrine the idea that America was built by frontier settlers. The decline of the Western coincided with the rise in self-consciousness of the descendents of Ellis Island immigrants. By 1970, the grandchildren of Ellis Island wished to assert a new vision. America, their movies implied, was built not by pioneers, but by Catholic and Jewish immigrants, especially the gangsters and policemen of the big cities.

Thus, Martin Scorsese spent over 30 years and more than $100 million to film the 1928 book Gangs of New York to push his mobocentric theory of American history back into the mid-19th Century. The tagline for his movie was "America Was Born in the Streets."

In "Appaloosa," Harris portrays the marshal, a man whose gun hand gets steadier the more the adrenalin flows. He's honest, courageous, professional (he always reloads his six-shooter instantly after killing a bad guy — you never know when you might need to shoot another one), and perhaps not quite right in the head. Mortensen is his deputy, better educated (a West Point grad), but content to follow his boss's lead because the marshal's slightly demented heroism provides him with a moral compass.

Both Westerns and Urbans offer promising plots for movies because they depict a Hobbesian world where life is full of interest. Modern crime movies are about the grim business of maintaining order. Westerns, in contrast, tend to be sunnier because they are about establishing order, forging a legitimate monopoly on violence.

The burghers of Appaloosa hire the pair to bring the law to their dusty town terrorized by the gang of a rich rancher turned brigand (played by Jeremy Irons, using Daniel Day-Lewis's I-drink-your-milkshake Mid-Atlantic accent). Harris and Mortensen pin on their silver stars, ask a few hotheads to come quietly, shoot those who won't, and soon order is instituted.

Then, disorder arrives on the train in the comely form of a tightly corseted widow, Ren?©e Zellweger of "Chicago." The actress endures a lot of flack for her scrunched-up facial features, but she's well cast here as a seemingly refined lady. The widow is looking for a Wild West town with such a high male-female ratio that nobody will notice she's not Lillie Langtry while she's on the prowl for the reigning alpha male.

The deputy (Viggo) is immediately smitten by her, but she doesn't notice him because he's only a beta. When the marshal (Ed) briefly goes off his rocker and brutally beats a harmless barfly for using vulgar language in front of a lady, he wins her heart and they quickly marry. To her disappointment, that savage moment proves anomalous. Mostly, the marshal is good at keeping the peace. Bored, the missus starts looking for trouble, which, quickly enough, finds her.

Westerns usually have happy, yet bittersweet, endings. The law-enforcing man of violence triumphs, making the settlement finally safe for children and schoolmarms. The tamed town no longer needs a hero, so he rides off into the sunset, obsolete but majestic.

Ed Harris isn't the most expert of directors, but his chemistry with Mortensen overcomes the occasionally off-kilter editing and inadequate score, making "Appaloosa" the best traditional Western since Kevin Costner's "Open Range."

Rated a soft R for some violence and language.