The Associated Press has a happy-talk story about African refugees being given plots of land — from “federal grants,” aka tax money — to grow vegetables, as if nobody else was responding to the increasing demand for fresh veggies.

Is farming a job Americans don’t want to do? Must we import illiterate foreigners to grow vegetables?

On the contrary, where I live in northern California at least, farmers’ markets have stalls of growers who are English-speaking Americans.

Below, Judith Redmond, a farmer at Full Belly Farm, selling her wheat berries and vegetables at the farmers market in Berkeley, California. 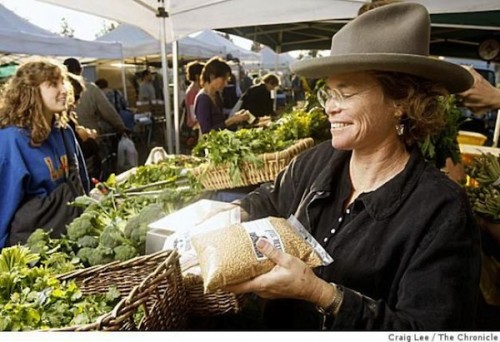 In addition, news outlets like stories of bored professionals who have chucked their office jobs for the the outdoor life. The BBC reported last year about The US professionals quitting the rat race to become farmers.

The New York Times described the modern locavore trend in At Midlife, Called to a New Field:

In recent years, as the local food movement has grown and farmers’ markets have proliferated, a new breed of back-to-the-landers has emerged. Some, like their predecessors in the 1960s and ’70s, are earnest, college-educated young people, turning their backs on professional career paths in favor of a life of hardscrabble idealism. But many others, homesteaders in their 40s and 50s, have already enjoyed the perks of professional life, and may even have made a fortune, or at least a comfortable nest egg.

To a large degree, the AP story is simply promoting Washington’s refugee program, which imports tribal people unlikely to assimilate, at the direction of the United Nations. The Rwandan woman described is typical of many refugees who have an “agrarian background” which presumably means little if any education.

The rapidly rising demand for locally grown fruits and vegetables has created a robust new market for refugees who fled violence in their home countries and found peace in farming small plots of land in several U.S. cities.

With help from a federal grant program and local charities, refugees like Angelique Hakuzimana of Des Moines are now harvesting crops — some of which are native to their home countries — to meet local demand. They’re also finding their place in new communities through an activity many are accustomed to, the federal program director said.

Hakuzimana, 39, was displaced by war in Rwanda in 2009 and settled in Iowa through a program sponsored by the United Nations High Commissioner for Refugees. On a recent September morning, she picked vegetables as farm manager Zach Couture read off an order sheet from a food cooperative.

She excitedly showed off rows of tomatoes, potatoes, carrots, kale, lettuce and eggplant planted as part of the Global Greens program through the Lutheran Services of Iowa. The hotel housekeeper also grows cassava, a carbohydrate-rich root that’s a dietary staple in Africa.

“I really like my garden. I like to work myself. Here you can do anything you like to do,” Hakuzimana said, at times struggling to find the English words to express her thoughts. “I’ve got a lot a food.”

The organization received $85,000 for its program, which offers farm plots on land owned by a West Des Moines church to 26 refugee families from several nations, including Bhutan, Burma, Burundi and Rwanda.

“The big thing is that many refugees come from agrarian backgrounds and this is something that they are extremely accustomed to,” said Munia, whose office is part of the U.S. Department of Health and Human Services. “The interaction with the local population and other refugees is a huge factor in helping them integrate.

“The fact that they’re growing food, sharing it with each other, sharing recipes and cooking for each other really helps. Their kids are out there playing together which helps with the language barriers.”

Eighteen have beginner gardens of about 50 feet by 50 feet to grow food primarily for their own use, and eight families have advanced to larger quarter-acre plots, the products of which are sold at a farmers market and to the Iowa Food Cooperative.

The Lutheran Services of Iowa organizes a small farmers market on Saturday mornings in its parking lot. On a recent morning, Pacifique Simon, 22, and his mother, Mariselina, stood before a table filled with potatoes and peppers from their garden.

His family — mom, dad and seven siblings — came to the United States in January 2008 under the United Nations refugee program, leaving their homeland in Burundi for the Democratic Republic of Congo to escape war, and later fleeing to Tanzania.

“We were in a refugee camp and life was not good there but the United States gave us the opportunity to come here,” said Simon, who is studying agriculture systems technology at Iowa State University. “This means a lot to me because we get to sell stuff and make a little bit of money so we can help our family and we can grow food so our family can feed other people and feed ourselves too.”

Simon’s hope is to someday return to Africa “to teach them new techniques to grow food and fight hunger,” he said.

Burbank said having families make money is a great part of the Global Greens program, “but it’s also about being able to grow some of their own cultural crops. It’s being able to involve their families, being able to just have their own land.”