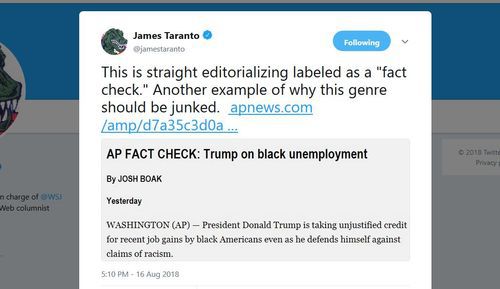 AP Fact Check On Trump's Black Unemployment Success: "We Don't CARE If It's True, We Hate Him So Much!"

This is straight editorializing labeled as a "fact check." Another example of why this genre should be junked. https://t.co/a4IDQpuZBa pic.twitter.com/l2GgbYxA0q

Yes, this isn't a fact check, it's an opinion:

WASHINGTON (AP) — President Donald Trump is taking unjustified credit for recent job gains by black Americans even as he defends himself against claims of racism.

Trump and his administration argue he's done more to help the economic well-being of minorities than Barack Obama, the country's first and only black president.

The implication is that Obama struggled to create jobs for his fellow minorities, while Trump has a sterling jobs record.

Trump has also frequently touted that black unemployment is at a record low. But that figure is volatile on a monthly basis. After achieving a record low of 5.9 percent in May, it has since jumped back up to 6.6 percent.

Trump is taking credit he doesn't deserve for job growth, according to many economists who view the continued growth since the middle of 2009 as the primary explanation for the recent hiring. More important, there are multiple signs that the racial wealth gap is now worsening and the administration appears to have done little, if anything, to specifically address this challenge.[More]

All this is opinion, as Taranto said, and fairly transparent hate.

The President generally gets credit or blame because he's the President. First Black President Obama liked to blame all his economic woes on the previous (white) President, George W. Bush, but it went on for eight years.

It's fairly obvious that two things that cause black unemployment are

As a left-wing Democrat, Obama was for a bad economy, and for wetback labor--and against calling it that, of course.(His fellow minorities don't feel like that--in Mississippi in 2008, black workers applauded as illegals were hauled away after a raid.)

Businessman Trump ran on improving the economy for American workers, including blacks, and stopping wetback labor.

He doesn't have a perfect record, but he's a hell of a lot better on both issues than Obama was, or Hillary would have been.