AOC Joins Martha’s Vineyard Migrants-Get-Out Movement To Keep Them Off Her Beach, But More Cagily

Hand it to U.S. Representative Alexandria Ocasio-Cortez. When it comes to booting illegal aliens out of her neighborhood, she has a little more finesse than the leftist whites at Martha’s Vineyard. Lisa Belcastro, the island’s homeless coordinator, said the posh resort town doesn’t have room for the migrants. AOC, as she is known, simply says a “better solution” must be found. That, we might presume, would be one that doesn’t keep them in her district at a beach once known as New York’s Riviera.

What a lot of Republican politicians fail to understand is that not everyone shares their zero-sum, scarcity mindset.

Many of us understand that immigrants and refugees are a blessing. They have so much to offer our country, & much of our growth as a nation is because of them.🫂 https://t.co/AEVdPQCMAi

In an interview with the New York Daily News after a news conference with communist New York Mayor Eric Adams, AOC said a city of tents in a parking lot at Orchard Beach isn’t the way to go.

“I think we can get to a place with a better solution here,” Ocasio-Cortez said:

Ocasio-Cortez said she also “very much” sides with “the sentiment” of Bronx Borough President Vanessa Gibson, who raised a number of concerns about the Orchard Beach site earlier this week, including poor transit access and susceptibility to flooding.

[AOC rips Mayor Adams’ migrant tents in her district: ‘We can get to a place with a better solution,’ by Chris Sommerfeldt, September 30, 2022]

Orchard Beach is the “Bronx’s sole public beach” and was called the “The Riviera of New York” when it was created in the 1930s, the city public parks authority says: 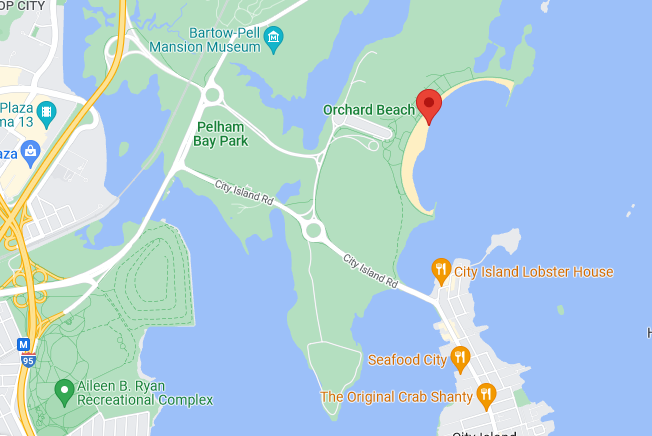 Also in question is whether Adams’ plan to give the illegals a beachhead in AOC’s district violates the city’s mandatory shelter ordinance, which inspired the suggestion that the illegals be housed in the Javits Center in Hell's Kitchen in Manhattan, Rep. Jerry Nadler’s 10th district [Bronx migrant tent camp under fire from NYC Council as Mayor Adams continues with plan, by Michael Gartland and Chris Sommerfeldt, September 30, 2022].

AOC says the city must follow the spirit of the law, not just the letter—at least as long as the illegals don’t befoul Orchard Beach in New York 14.