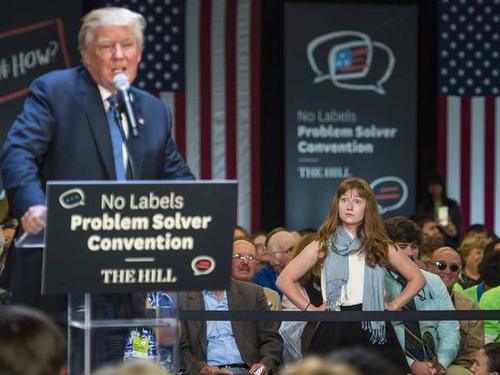 A whining shrew ambushed Donald Trump at the "No Labels" political event, asking a typically incoherent feminist question about Trump supposedly not being a "friend" of women.

News outlets reported it as a confrontation about women’s rights. Batchelder asked whether she, under a Trump presidency, would make the same as a man, and if women would have the “right to control their bodies.”

As Trump's campaign manager noted, Batchelder has been a public supporter of Jeb (which is surprising enough, as I was beginning to wonder if they even existed.) According to her LinkedIn profile, Batchelder is actually an intern at Jeb Bush for President 2016. And her profile picture is her posing with none other than Senator John McCain.

What incredible about this is that the thrust of Batchelder's question was about Trump not being sufficiently supportive of women's freedom to do what they want "with their bodies," aka abortion. But Jeb Bush and Batchelder's other boss, Senator Kelly Ayotte, are both supposedly pro-life, as are most Republican women.

This just shows that the Republican Establishment can't even conceive of launching an attack that doesn't come from the Left. The GOP Establishment always operates within the Left's rhetorical frame, which is why it never actually accomplishes anything except its own enrichment.

As one reader notes, CNN eagerly promoted the exchange between Trump and Batchelder as some kind of crushing defeat for The Donald. Actually, as you can see from the video, Trump made a joke, won the audience, than calmly defused the situation. So this is just more media bias in action.

But more than that, CNN was likely complicit in this plant, as they picked her specifically to do a question, then let her do a follow up when no one else got one.

The Main Stream Media, Jeb Bush, Hillary Clinton, and other supposedly disparate forces are all deathly afraid of Donald Trump. And that should tell us something.