Anti-Trump Mob Besieges Trump Tower—They Wouldn't Do That To Hillary, She's One Of Them 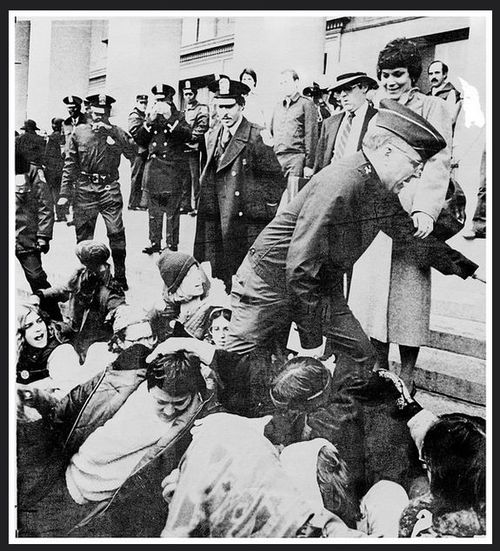 I remember a story from the 1980s about some protesters who showed up the Pentagon right after Reagan was elected, and said they were protesting the war. “What war?” said the Pentagon guards, probably thinking that if there’s a war, they usually tell the Pentagon first. “The war that Reagan is going to start.”, replied the protesters.

You or I or any non-Leftist historian might consider Jimmy Carter, Reagan's opponent, as dangerously soft on Communism, but actual Communists were willing to give him credit for enough patriotism that they'd consider him the enemy.

But if Hillary had been elected, the protests wouldn't be happening—Hillary is one of them.

Vigils and protests arise in wake of Trump victory

Vigils and protests flared up across the country Wednesday evening as opponents of President-elect Donald Trump expressed dismay with the election results, underscoring the difficult task he faces in uniting a fractured country.

Despite Hillary Clinton and President Obama urging their backers to accept Trump’s victory and support his transition into power, demonstrators marched through the streets of New York, Chicago, Washington, Austin and other cities, decrying his crude comments about women and attacks on immigrants.

No amount of protesting and chanting done by her will count as hate, any more than Obama’s race riots.

Rainbow flags and signs bearing messages such as “Time to Revolt” waved above the crowd, as protesters filled Michigan Avenue, cheered on by drivers who honked their support. They then shut down Lake Shore Drive, the expressway along Lake Michigan.

In New York, hundreds of demonstrators spilled across Union Square and then marched to the Trump Tower in midtown Manhattan, chanting, “Donald Trump, go away! Sexist, racist, anti-gay!” When they arrived at the building, which had been blocked off with police barricades, protesters shouted up at the real estate developer inside: “We’re all immigrants!”

If you protested like this against a group home for homeless drug addicts and ex-convicts, you can be investigated under the Fair Housing Act. Donald Trump is white, so it’s OK for people to gather outside his home and shout “Go away!”

As the night went on, the size of the crowd swelled, stretching several blocks down Fifth Avenue. At one point, demonstrators lit an American flag on fire in front of Trump Tower.

And as the sun set in Washington, a crowd of hundreds of mostly young protesters gathered outside the White House for a candlelight vigil before marching to the new Trump International Hotel a few blocks away on Pennsylvania Avenue.

“I’m trying to not be angry and trying to find more positive way to express my reactions. I don’t think anger will help,” said Kate Lasso, 57, who joined the crowd. But for the wife of a Guatemalan immigrant, who has relatives in the country [who are illegal immigrants], restraining emotion was difficult.

“They have kids,” she said. “They have been living here. What is going to happen to them?”

Many who turned out said they were fearful that Trump would follow through with his pledge to deport [illegal] immigrants.

“I just felt waking up today that I was waking up to a whole new world, to a nightmare for my parents and people I care about and love,” said Tony, a 23-year-old line cook who declined to give his last name as he marched in Chicago, carrying his 6-year-old daughter on his shoulders.

“There’s so much heartache,” he said. “It’s a bad time to be a Muslim or an illegal citizen in this country.”

It's always a bad time to be an " illegal citizen" in any country. My advice is to go someplace you're legal.

And finally, in what would count as hate speech if you did it to a Koran or the flag of ISIS, is this: