In Riverside County, California, anarchists, er “activists” have been intercepting drivers headed toward police checkpoints to warn off illegal aliens who may be drunk and/or unlicensed. They stand beside the road with big signs a block or two ahead of police stops to allow miscreants the time to turn back. 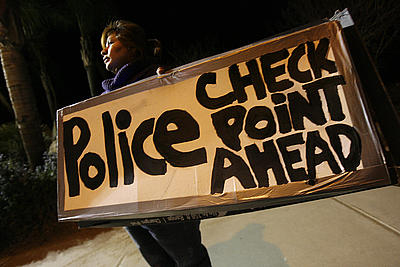 Yep, the anarchists believe that the ability of hispanic lawbreakers to drive is more important than public safety. They say it’s “unfair” that police conduct checks that bust more aliens than citizens.

It would be more precise to note the situation is a target-rich environment. By definition, illegal aliens who drive without licenses in California do so unlawfully. And even NPR has admitted that hispanics drive drunk at disproportionately high rates.

The job of police is to catch bad guys and prevent crime when possible. That means that effective PDs go to locales where a lot of crime is committed. (See Heather MacDonald’s recent analysis of how extremists blame police for being too efficient, Distorting the Truth About Crime and Race.)

According to Raza anarchists, America should cut illegal aliens extra slack because they commit more crime (like their style of entrance). It’s an upside-down argument, but in today’s political climate, it sells well among the victimization peddlers.

The high school student was among protesters hoping to help illegal immigrants whose vehicles were about to be impounded by police because they were driving without a license. California law got tougher in 1993, requiring a social security card and other identification to get a license and barring most illegal immigrants from applying.

Now the stricter license requirements and a rising number of checkpoints across the Inland area and state are stirring controversy that has reached a fever pitch in some cities with a large Latino population.

Critics say most Inland checkpoints economically punish illegal immigrants whose cars often are impounded for 30 days — the maximum time allowed — and can ill afford the approximately $2,000 to retrieve the vehicle. Protesters point out that drunken drivers usually lose their car for only one day. They say racial profiling is at play where checkpoints are placed.

Inland authorities said softer penalties, such as citations, for unlicensed drivers don’t work because many illegal immigrants lack identification and can’t be found if they skip court. Police say impounding cars is needed to deal with drivers without licenses, who account for about 40 percent of the nation’s hit-and-run crashes based on statistics of hit-and-run drivers who were caught. And police say that traffic volume, not a neighborhood’s racial composition, determines checkpoint locations.

“Usually people only see the fact that we’re creating a monster for them and we’re taking their car and taking their livelihood,” said Perris police Sgt. Dan Lingo, who supervises the city’s checkpoints. “The other side of it is they’re breaking California law and they become a risk to the public.” […]

Activists and illegal immigrants such as Elder Cabrera, a 40-year-old Corona resident, say month-long impounds are too harsh.

With a wife and child to support, getting to and from the Corona glue plant where he works is his first priority.

When Perris police recently impounded his 1992 Nissan Maxima for 30 days, Cabrera never got it back from the tow company. Rather than wait a month and pay about $1,800 to retrieve it, Cabrera bought a 15-year-old Toyota Camry for $2,000 two days after the checkpoint.

“If you don’t have a car in this country, you’re nobody,” Cabrera said in Spanish.

At least a little attention is paid in the article to the victims of drunk drivers.

Lori Gleason, director of Mothers Against Drunk Driving in Riverside County, told the council how she lost her 20-year-old son to a four-time repeat offender with a suspended license.

“How would they feel if they turn away a drunk driver who ends up killing a pedestrian or one of their family members?” she asked.

Someone should tell the anti-safety advocates that plenty of hispanics are killed by drunk-driving, like little Bryan Mendoza who died when his blotto drunk father crashed the family vehicle.