Previously from Paul Kersey on SBPDL: The Mask is Slipping: Michael Eric Dyson Calls for the Killing of White Children

On Tuesday, leftist podcast host and self-described "antiracism educator" Tim Wise called for the destruction of "white Alabama" if Republican Senate candidate Roy Moore wins the race, which he is currently leading. 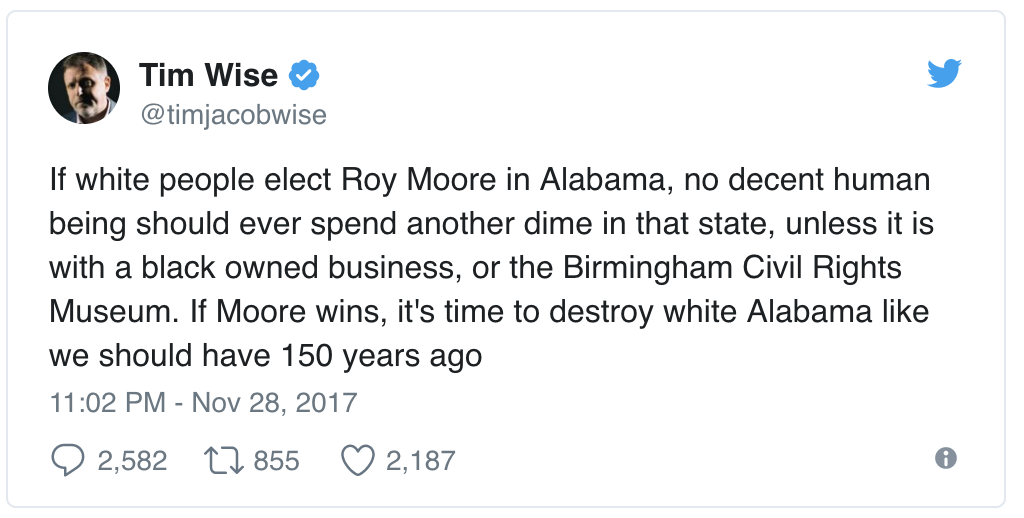 There can be no way to coexist with people like this...

"If white people elect Roy Moore in Alabama, no decent human being should ever spend another dime in that state, unless it is with a black owned business, or the Birmingham Civil Rights Museum," wrote Wise. "If Moore wins, it's time to destroy white Alabama like we should have 150 years ago."

A new opinion piece in a Texas State University student newspaper tells white students, “Your DNA is an Abomination.”

“When I think of all the white people I have ever encountered - whether they’ve been professors, peers, lovers, friend, police officers, et cetera - there is perhaps only a dozen I would consider ‘decent,’” student author Rudy Martinez writes in the University Star.

Without much biological explanation, Martinez informs white readers, “You were not born white. You became white… You don’t give a damn.” Later in his rant, he calls the police “fascist foot soldiers” and says a “white supremacist inhabits the White House.”

The editorial also suggests that “whiteness in the United States” is a “construct used to perpetuate a system of racist power.”

According to social media posts, Martinez was arrested in Washington, D.C., during President Trump’s inauguration and attempted to crowdfund for legal fees.

Andrew Homann, former TSU student body president, took to Facebook to express his disgust with the blatantly anti-white piece.“Just when you think the opinion's columns in the University Star couldn't get any worse, they publish this masterpiece and exceed my expectations,” Homann posted.

Homann told the Washington Examiner: “I have no doubt that racism is still alive today. Look no further than this blatantly racist, divisive article posted by the University Star. While I believe Mr. Martinez has every right to express his disparaging world-view, I am appalled that the school paper, funded by tuition and tax dollars, would give this guy a platform to do so.”

The editorial concludes: “Whiteness will be over because we want it to be. And when it dies, there will be millions of cultural zombies aimlessly wandering across a vastly changed landscape. Ontologically speaking, white death will mean liberation for all… Until then, remember this: I hate you because you shouldn’t exist. You are both the dominant apparatus on the planet and the void in which all other cultures, upon meeting you, die.”

One wonders if Rudy Martinez has ever sat through a campus lecture on the need to abolish whiteness by Tim Wise?