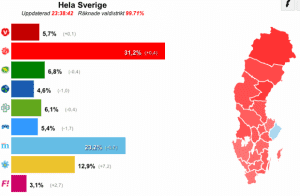 [T]he Social Democrats: they’re still on 31 per cent, as they were at the last general election – and that was one of their worst defeats for decades. So Sweden is about to get a new Prime Minister (Stefan Löfven) from a party that spectacularly failed to lift itself off the floor.

The only real gainer is the Sweden Democrats, who are (as I type) on 13pc of the vote, more than double the 5.8pc last time.

Shock election in Sweden as the far-right Sweden Democrats become No.3 party, by Fraser Nelson, September 14, 2014.

All other parties in Sweden refuse to enter coalition with them (and were shocked enough that they got into parliament four years ago). But this has helped them play the insurgent card, saying the Stockholm “elite” is ganging up against them.

And the TIME report confirms:

Despite the gains, the Sweden Democrats are unlikely to attain their main goal of sharply reducing immigration because all the other parties are in favor of a liberal asylum policy.

This year, Sweden expects up to 80,000 asylum-seekers from Syria, Eritrea, Somalia, Afghanistan, Iraq and other countries — the highest number since 1992.

Emphases added. Of course, this is symptomatic  of a terminally sick political culture, and a recipe for explosion.