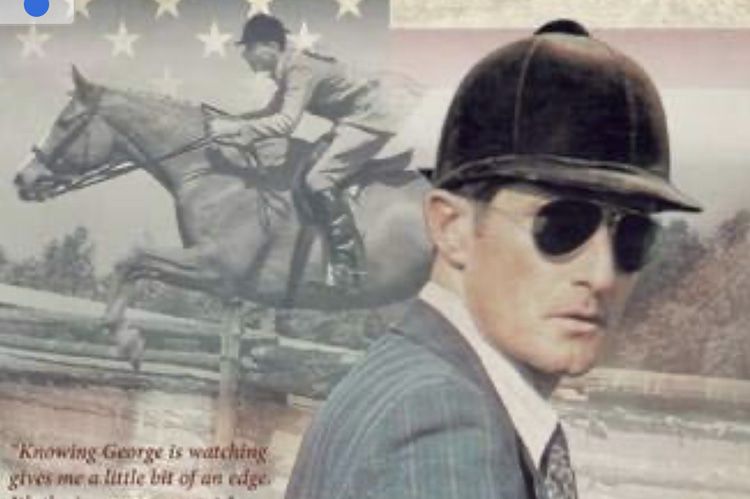 In the New York Times, here’s a good example of how NYT reporters write their stories upside down to not initially shake The Narrative about who, exactly are the Good Guys (the Diverse) and who are the Bad Guys (Straight White Males), but then eventually get around to revealing the relevant facts long after most subscribers have stopped reading and smugly turned the page:

Whispers of Sexual Abuse Tailed an Equestrian Legend for Decades. At 81, He Was Barred for Life.

George H. Morris’s stature in the sport was nearly unrivaled, even though some in the horse world said they had long been aware of his relationships with minors.

For more than five decades, George H. Morris was the king of equestrian sport, a former Olympic coach whose words — from how to ride to what breeches to wear — were gospel for riders at every level.

He had a magazine column in which he sometimes complimented but often eviscerated riding photos that equestrians submitted to him, and he even had an action figure that spouted his trademark snarky aphorisms.

That all came crashing down Monday when Mr. Morris was barred for life from all domestic and international equestrian sports after an investigation into “sexual misconduct involving a minor,” according to the United States Center for SafeSport, an independent body that investigates sexual misconduct in Olympic sports.

The lifetime ban of Mr. Morris, 81, a vaunted Olympian whose books on horsemanship are called bibles by riders, has roiled the equestrian community.

An “I Stand With George” Facebook page and hashtags, promoted by some of the sport’s best-known names and revered champions, have sprouted in his defense, as fury rages at SafeSport’s purposeful lack of transparency: To protect victims, SafeSport does not release details of its investigations, other than the result, according to Dan Hill, a spokesman for the nonprofit organization.

And yet even in the complicated world of sexual abuse investigation, the inquiry into allegations against Mr. Morris stands out for a variety of reasons. His stature within the sport is nearly unrivaled.

Okay, okay, but when are they going to get to the female victims of the Evil Straight White Male of the Week?

While there is more than one victim, the only one to publicly identify himself is a convicted sex offender who struggled with substance abuse and initially came forward seven years ago, then recanted, then came forward once more.

Uh … wait a minute … Is this Evil Straight White Male’s accuser being referred to by the pronoun “himself”? … Am I reading that complicated sentence correctly?

Another accuser is in prison. Many in the sport who have rallied to Mr. Morris’s defense have explained away his alleged behavior by saying times were different.

The SafeSport investigation involved more than one accuser, according to three people with knowledge of it who were not authorized to speak publicly about its details and who were unable to disclose the total number.

In addition, in interviews with dozens of former students and professionals who spoke with The New York Times, many said they had long been aware of Mr. Morris’s relationships with minors, though few agreed to speak publicly, afraid his status as equestrian kingmaker could wound their careers or chances to win ribbons in the horse show ring.

Well, this is boring … Time to stop reading about yet another Evil Straight White Male abusing females.

One of the few who spoke openly about Mr. Morris was a man who said his ex-boyfriend, now deceased, was a former student and victim.

The man is currently serving a 20-year prison term after he faked being a plastic surgeon, resulting in the death of a woman he treated.

Mr. Morris has vowed to appeal SafeSport’s findings “regarding unsubstantiated charges for events that allegedly occurred between 1968 and 1972,” he said in a statement on Monday. “I have devoted my life to equestrian sport and the development of future riders, coaches and Olympians. Any allegations that suggest I have acted in ways that are harmful to any individual, the broader equestrian community, and sport that I love dearly are false and hurtful.”

Through his representative, Mr. Morris declined to be interviewed or to address any specific complaints about his relationships with riders.

The lifetime ban, which is reserved for the most egregious cases, according to SafeSport, comes on the heels of a wave of revelations about sexual abuse in the horse world. A 2018 Times investigation into Jimmy A. Williams revealed he molested several of the girls he trained over his nearly 40-year career. In June, after SafeSport barred Robert Gage, a trainer based in California, following an investigation into sexual misconduct, Mr. Gage killed himself.

The Times interviewed 53 former students, current top competitors and professionals, some of whom defended Mr. Morris and said they saw nothing untoward. Yet Mr. Morris’s relationships with minors were gossiped about from the warm-up ring to popular online message boards at Horse Show Diva and The Chronicle of the Horse.

Several people described Mr. Morris as consorting with underage students throughout his career, particularly during the 1970s. His behavior was waved away at the time as louche but acceptable, or the boys themselves were blamed or perceived as deliberately cultivating his attention for their gain.

Boys? I thought this was about girls!

Mr. Morris was born in New York City, but grew up in New Canaan, Conn., where he fell in love with horses, according to his memoir, “Unrelenting.” Mr. Morris came to national prominence when he won a team silver medal in Rome at the 1960 Summer Olympics. Later he became the United States equestrian team’s chef d’equipe — nothing less than its lodestar — leading the show jumpers to a team gold medal at the 2008 Beijing Olympics.

In his memoir, Mr. Morris reveals a wilder side, including trips to places like Studio 54 with students who were minors at the time. He estimated the number of his sexual partners to be “10,000 and counting!” though he does not specify the ages of those partners.

Wait a minute … If I didn’t know stereotypes were always false, this would seem to imply that the Evil Straight White Male is gay.

From his equestrian facilities on the East Coast, Mr. Morris churned out the country’s best riders during the ’60s, ’70s and ’80s, many of whom lived with him on site as working students, competing in the junior, or 18-and-under, division.

Michael D. Cintas, who coached equestrians for the United States Olympic modern pentathlon team in 2008, said he won a scholarship to train and live on Mr. Morris’s farm in 1964 when he was 16. Mr. Cintas, who said he was not abused, considers Mr. Morris a father figure. But he said that his coach’s reputation for having sexual relationships with boys he would scout and bring to train on the farm was common knowledge among students and barn staff.

Let me do a quick text search on this article for “gay” … OK, “gay” doesn’t appear anywhere in its substantial length, so I must be getting confused about the Evil Straight White Male.