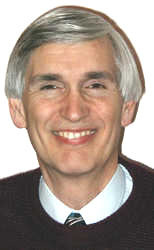 There are many stories like this one all across America, where a drunk driving illegal alien has killed an innocent citizen, because Washington refuses to control the border and enforce immigration law.

In a case like this one, where the perp was also killed, there is often little enthusiasm in the press to investigate the cause of the crime. Because there will be no trial, the authorities don't much pursue the identity or background of the drunk driver. Many in these groups want no bad news about diversity, so the press often overlooks the ongoing carnage caused by open borders.

An exception is North Carolina columnist Ed Johnson who reflected on the loss of his friend, Lewis Fetterman (pictured), in an opinion piece, My friend is dead (Dunn Daily Record, August 12, 2008).

Lewis Fetterman was one of the nicest guys you'd ever meet. He was tall, thin, and had gray hair that was cut evenly on all sides in a way that reminded me of a mushroom. We often sat together at lunch. He was usually quiet. It seemed as though he was always smiling.

I lost my friend Lewis on March 15 when an intoxicated, undocumented alien drove into him.

Who knows how many Americans have been killed like this by illegal aliens? I suspect the number is larger than the total of U.S. soldiers killed in Iraq. After all, CNN reports that more than 6,000 people have been killed along the Mexican border during just the last two years.

What could our federal government have done to prevent the death of Lewis Fetterman and others like him? Article IV, Section 4 of the Constitution says, "The United States… shall protect each [state] against invasion." With there now being at least 12 million people here illegally, clearly we've been invaded. The President and members of Congress have failed their Constitutional duty to protect us. [...]

Troopers said Rivas, of 264 Preston Lane, is thought to have had alcohol in his system. Toxicology reports have not been released yet. The 46-year-old was not a licensed driver, troopers said.

Lewis Fetterman was an assistant professor of pharmaceutical sciences at Campbell. He held a doctorate in analytical chemistry.

"He was viewed as a strong, forthright, Christian, gentleman scholar and I think we're all deeply saddened by his loss," said Dr. Thomas Holmes, associate dean of pharmaceutical sciences at Campbell.

Another tragic victim of open borders.