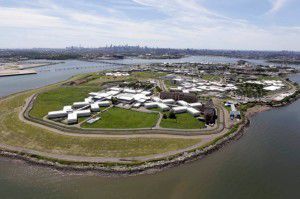 You have to wonder what goes on in newsrooms nowadays.

This morning's New York Post ran a story about Rikers Island, New York City's main jail.  The story is online (link below); you can read it for yourself.

It concerns a facility at Rikers called the Transitional Repair Unit (TRU).

The 11-inmate Transitional Repair Unit was created inside the Robert N. Davoren Complex on Rikers in late 2014 as part of de Blasio’s criminal justice overhaul.

It was designed to keep underage prisoners out of solitary confinement, also known as “the hole,” because advocates claimed the punishment was inhumane.

But despite Hizzoner’s claims that the TRU would “put these young New Yorkers on the path to better outcomes,” some say it’s actually serving as a virtual clubhouse for up-and-coming criminals.

“They don’t fear it at all. In fact, they feel safer there because they’re with friends and fellow gang members,” said one correction officer, who wished to remain anonymous. “You have the same inmates continually ratchet up their behavior — their assaults on officers, on inmates — to get back into the TRU.” [Why inmates want inside Rikers' disciplinary wing by Shawn Cohen; New York Post, January 18th 2016.]

We get some actual names:

Records obtained by The Post show that the 11 teens who were housed in the TRU last week have racked up a combined 135 infractions while locked up at Rikers.

They include five reputed members of the Bloods gang, one of whom — Tyrik Ross, 17 — is awaiting trial for armed robbery . . .

Another inmate in the TRU, Rashad Watson, 17, is a reputed member of the Young Gunners gang and is locked up for burglary.

There doesn't seem to be any official data on the demographics of Rikers inmates, but people who know the place, especially Social Justice Warriors keen to illuminate our society's "structural racism" or "institutional racism" (consult your local Social Justice Information Office for the distinction), tell us that the inmates are 95 percent black and Latino.

That online story is illustrated with an aerial view of the island. But here's a funny thing.  When I'd opened my paper copy of the New York Post to browse over breakfast this morning, there was the Rikers story on page nine all right, but with a completely different picture. 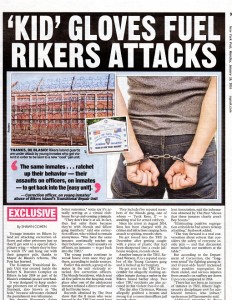 The print editions of newspapers are put to bed around midnight.  (My copy lands in my driveway here in the outer-outer NYC suburbs at 6 a.m.)  It was mid-morning—around 10:30 a.m.—before I pulled up the online version of the story.

So one of the following things is the case.

One hesitates to think the worst of one's fellow citizens, especially those who toil away so selflessly in the noble profession of newspaper journalism.  Still, one can't help but wonder which of the above is the case.

It makes the nation free!

Before it tyrants prostrate fall,

In what a state of wretchedness

Without it we should be;

And can we then too highly prize

The source of liberty?

It dissipates our gloom!

And sheds a ray of happiness

O'er victims of the tomb:

See, darkness from his ebon throne

Has fled to realms of night,

And o'er the world is now diffused

A flood of heavenly light.

What thanks are due to those,

Who all attempts to quench its beams

To then belongs the wreath of fame!

The garland of renown!

The honor of a deathless name!

Blessings by it abound!

It changes man, and makes him great,

Wherever man is found.

The idols of the heathen land,

And scepters from the tyrant's hand,

Through it are cast away.

It makes the world anew;

And it will bring millennium on,

And give us then to view

The end of war, and lasting peace,

When sheathed shall be the sword;

And men shall call this hampered earth

The Garden of the Lord.

(I've taken my version from Michael Turner's invaluable Parlour Poetry: A Hundred and One Improving Gems.  I can only find shorter versions on the internet, e.g. this one from 1835.)