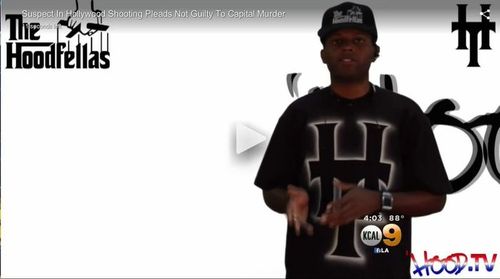 One of the more bizarre murders in Los Angeles this month was the shotgun assassination of a 30 year old white woman walking with her boyfriend in the tourist part of Hollywood. The boyfriend was untouched.

It seemed too horrible to be a random racist hate crime: an execution-style murder of a white woman in a high traffic area would a big step up in Polar Bear Hunting from, say, punching Matthew Yglesias a few times on a lonely street. But it also didn’t seem like some big money organized crime-related thing either.

Ezeoma Chigozie Obioha, 31, is charged with one count of murder with the special circumstances of lying in wait and murder for financial gain in the July 5 shooting death of 30-year-old Carrie Melvin, according to the Los Angeles County District Attorney’s Office.

Obioha has been ordered to remain jailed without bail.

Police say Obioha knew Melvin, whom had reportedly threatened to take Obioha to court to collect several hundred dollars from a check he had previously bounced.

Melvin had a social media company and had agreed to market Obioha’s “hoodfellas” clothing, according to LAPD Lt. John Radke.

Obioha, who was already in custody, was arrested Friday and booked on suspicion of murder at the LAPD’s Olympic Station, Sheriff’s officials said.

The shooting occurred July 5 around 10:10 p.m. as Melvin was walking with her boyfriend near the intersection of Sunset Boulevard and McCadden Place when the suspect walked up to them and fired a single shotgun round at Melvin.

Judging from the video of Ezeoma Chigozie Obioha promoting his “hoodfellas” line of hoodies, he has an African-American accent, so he’s not a recent immigrant.