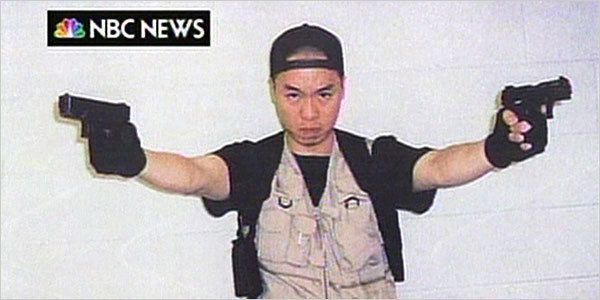 Anonymous Asian Commenter:"I Understand Why The The Student Turned Into A Gunman"

Via the Knickerblogger, who linked to an earlier article of mine,I found this chilling comment posted by an anonymous Asian commenter on the New York Times blog. Obviously, this is a case of blaming Americans for the actions of immigrants—the Knickerblogger's post is titled as predicted - blame the shootings on Americans and highlights a story on the killer having been picked on at school.

This post from an anonymous Asian student is chilling because he represents, traditionally, the best kind of immigrant—hardworking, successful, high IQ. But see how he hates you and me!

I understand why the the student turned into a gunman. I knew that something like this was going to happen, and this may be the beginning, unless Americans become more respectful to non-white people (both verbal and nonverbal). Racism is constant, mostly nonverbal. I came from a similar background, although not exactly the same. During the junior high school, I was one of the few Asians at the school. Many students are racists and people called me many names. I also spoke constantly about killing people. I started lifting weights, and at the end of that year, I was the strongest in my school. I played with lots of bb guns and paintball guns. I started playing various sports (fball, wrestling, etc). My parents were also poor. Many immigrants either join gangs or some people play sports to release their anger. Fortunately, I was able to overcome the environmental factors, became very popular in high school, and overcame the adversity. It is a special challenge for immigrants and non-caucasians in America. I have an incredibly strong will power and through the help of God, I overcame adversities and constant racism. Now, I am very successful. Many people will not overcome racial adversities and this shooting could just be the beginning… My advice to all Americans:
1. Be respectful to all people (both verbal and nonverbal), all the time.
2. I don’t understand the gunlaw(biggest problem)
3. American media is full of junk (violence(WWF), sex(OC), drugs, and violent music. Get rid of them, now.
4. Understand that many people from other countries that have poor english accents are better educated than many americans here, with masters and PhDs. Be respectful to people in all places, but most Americans will never know what it feels like to be non-white, because white people are nice to white people.
5. The gunman had personal problems, but it is the media, and the americans that influenced the gunman. Again, the gunlaw is also incomprehensible.


p.s. don’t reply or leave my email address. I will not be pleased. Also, I didn’t check the spelling and the grammar.