Ann Corcoran: "50,000 Refugee Cap Should Be Reached Today, Then What?" Then A Refugee Quota Of ZERO, That's What!

Ann Corcoran at Refugee Resettlement Watch has the story on the Refugee Cap. Looking at the refugees above, I can't see why they can't stay in Jordan. Ann has a suggestion for the Trump Administration:

50,000 refugee cap should be reached today, then what?

Then for the remainder of the 120-day ‘moratorium’ only refugees with certain relatives and certain “bona fide” connections to US entities will be admitted. 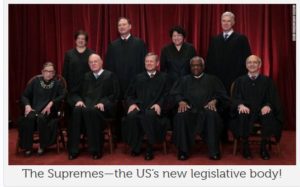 Once we pass the CEILING for the first time in the history of the program, it is my view that the refugees will belong to the Supreme Court since it has taken it upon itself to unconstitutionally WRITE REFUGEE LAW!

Adding to the confusion going forward is the fact that the 120-day moratorium will  run in to late October (Supremes will likely not have ruled on the merits of the case by then).

September will be the real test for Trump’s Presidency on the refugee issue….

Late October (when the 120 days will be up) is a month PAST the legally required deadline for the President to send his 2018 refugee determination to the Hill. (Here is one of many posts on the ‘determination’ for new readers.)

In September, how will the White House handle that wrinkle SCOTUS has handed them? 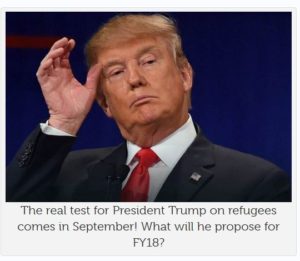 LOL! Of course one thing the President could do is send a Determination to the Hill for FY18 of zero and tell Congress to reform the program in a serious way during a year-long moratorium.

(The Labrador bill isn’t much.)

Here is the story at KPCC radio in Southern California that got me going on this subject again this morning:

Once that happens, all refugees will have to prove they have close relatives in the United States or established ties such as a job before they can gain entry. The new rules will remain in effect for at least 120 days, starting from late June when the U.S Supreme Court ordered the partial reinstatement of the Trump travel policy.

The State Department posted guidance listing the accepted categories of relatives: “a parent (including parent-in-law), spouse, fiancé, fiancée, child, adult son or daughter, son-in-law, daughter-in-law, sibling, whether whole or half. This includes step relationships. The following relationships do not qualify: grandparents, grandchildren, aunts, uncles, nieces, nephews, cousins, brothers-in-law and sisters-in-law, and any other ‘extended’ family members.”

A department spokeswoman told KPCC by email that refugees scheduled to travel to the U.S. will be allowed in until the end of Wednesday. Then, “beginning July 13, only those individuals who have a credible claim to a bona fide relationship with a person or entity in the United States will be eligible for admission through the U.S. Refugee Admissions Program.”

A relationship with a U.S. entity, such as a university or employer, can also qualify a refugee for entry on a case-by-case basis. However, the spokeswoman said refugees are not likely to have such ties and are more likely to have connections to relatives.

The State Department made clear that a relationship with a U.S. resettlement agency does not count as a qualifying relationship.

Remember when Donald Trump rolled out his first Executive Order and wanted to prioritize Christians and the contractors*** went crazy and said that was not fair. The lead squawker was the Hebrew Immigrant Aid Society!

Well, you need to know, before you read this next segment of the story, that we have been prioritizing Jews from, first Russia, and now Iran (processing them after they get to Austria as visitors) as refugees to America! Learn about Lautenberg here.

The agency that Castro directs settles many Iranian Jews who travel to the U.S. via Austria, arriving through a refugee program that benefits religious minorities. He said one of his agency’s refugee clients has been waiting in Austria. She is being vetted by U.S. officials but likely will be stuck in Austria because she has no close relatives in this country.

Resettlement agencies say they have yet to receive guidance from the federal government about what happens once the 120 days of the temporary refugee travel ban are up.  [Again, the 120 days puts us in to the new fiscal year—what will Donald do in September?—ed]

“I suspect that what will happen is there will be a push to make this more permanent in some form,” Castro said. “I can’t imagine going back to the status quo prior to the order.”

I can’t imagine that either!  It would be political suicide for Trump if he reverts to the old system of secret refugee seeding by phony ‘religious’ charities!

All of my posts on the Supreme Court’s overreach are here.

***Federal contractors/middlemen/lobbyists/community organizers paid by you to place refugees in your towns and cities.  Because their income is largely dependent on taxpayer dollars based on the number of refugees admitted to the US, the only way for real reform of how the US admits refugees is to remove the contractors from the process.