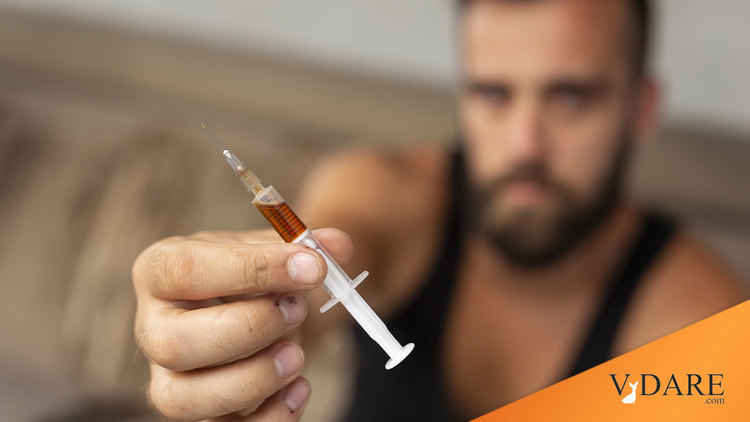 Andrew Sullivan And His Testosterone-Fuelled Attacks On Palin

Kathy Shaidle suspects Andrew Sullivan's increasing strangeness (which she's been following for some time) is caused by AIDs finally affecting his mind. Sullivan's latest thing is spreading Sarah Palin rumors. Sullivan's wackiness is more likely to be related to the testosterone he takes, (legally) to control the lack of testosterone caused by long-term HIV. That is, his disease would make him less hyperactive, with a tendency to take naps in the daytime. It's the cure that makes him weird.

Andrew Sullivan: Then there's anger. I have always tended to bury or redirect my rage. I once thought this an inescapable part of my personality. It turns out I was wrong. Late last year, mere hours after a [Testosterone] shot, my dog ran off the leash to forage for a chicken bone left in my local park. The more I chased her, the more she ran. By the time I retrieved her, the bone had been consumed, and I gave her a sharp tap on her rear end. "Don't smack your dog!" yelled a burly guy a few yards away. What I found myself yelling back at him is not printable in this magazine, but I have never used that language in public before, let alone bellow it at the top of my voice. He shouted back, and within seconds I was actually close to hitting him. He backed down and slunk off. I strutted home, chest puffed up, contrite beagle dragged sheepishly behind me. It wasn't until half an hour later that I realized I had been a complete jerk and had nearly gotten into the first public brawl of my life. I vowed to inject my testosterone at night in the future.

And of course, you can avoid going out in public under the influence, just as you can with alcohol, but if you're a blogger, your computer is there 24 hours a day.