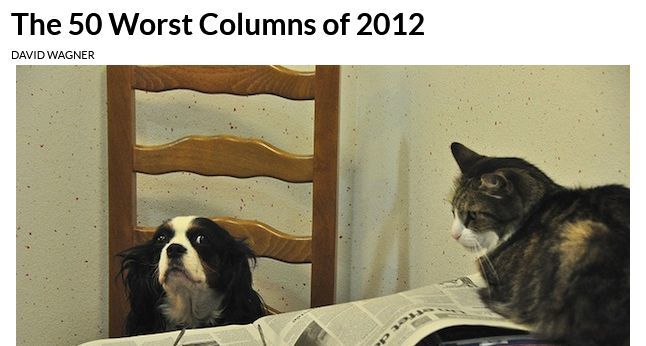 Someone named David Wagner at something calling itself The Atlantic Wire has compiled a "50 Worst Columns of 2012" list.   Guess who's at the Number One spot?  Yes! ? little old me!

To be so distinguished is an honour which, being very little accustomed to favours from the Great, I know not well how to receive, or in what terms to acknowledge.

I await notification of the awards ceremony.

Here is Mr Wagner's notice.  I have copied it in full, unedited, which is more of a courtesy than Mr Wagner has extended to me when extracting from the award-winning column.  He omits the following qualifying sentence: "Thus, while always attentive to the particular qualities of individuals, on the many occasions where you have nothing to guide you but knowledge of those mean differences, use statistical common sense."

Mr Wagner manages to commit shoddy journalism twice, in fact ? quite a feat in such a short paragraph.  I made it clear I did not sit my kids down for a talk, only that if I had it would look something like my numbered points.  A small difference:  but it is precisely small differences that separate the sloppy from the punctilious.  You just can't get good help nowadays.

John Derbyshire at Taki's Magazine on teaching his kids to be racist.

John Derbyshire wants his children to be safe. So he sat them down for a "nonblack" talk, which included such valuable advice as, "If planning a trip to a beach or amusement park at some date, find out whether it is likely to be swamped with blacks on that date (neglect of that one got me the closest I have ever gotten to death by gunshot)." Parents wanting their kids to grow up to be decent human beings might want to sit down their kids for a talk about never reading John Derbyshire again.

So let's conjure up a scenario.  Mr Wagner is sitting at home watching MSNBC when the phone rings. It's one of his teenage children calling from an amusement park, whither he has gone with some friends for the day.  He reports that packs of young black kids are "running around, making a lot of noise, using bad language, pushing people."  Should Wagner, Jr. maybe leave the park?

Mr Wagner replies that of course his child should do no such thing.  He patiently explains that the rampaging young blacks are merely being vibrant ? bringing some much-needed and colorful vitality to our dull, dead, white-bread, middle-class culture!  He further advises that in the event any of the blacks should get confrontational, which of course is exceedingly unlikely, Wagner Jr. should remonstrate politely with them.

Mr Wagner then hangs up and resumes watching Chris Matthews.  Heck, if the kid takes a bullet, at least he will have died in an atmosphere of diversity.