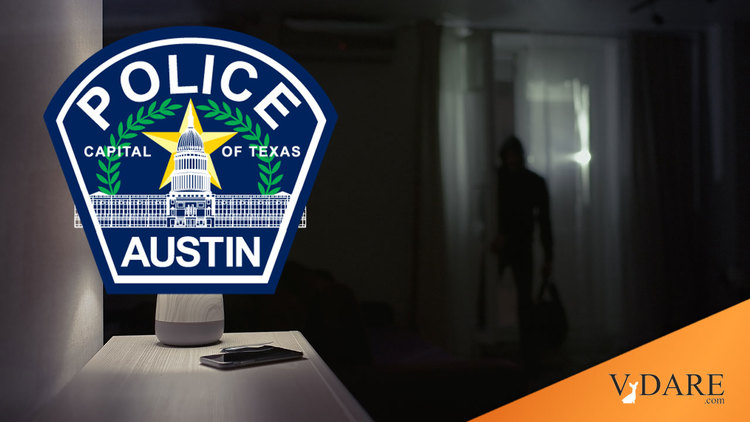 And The Criminals Win: Austin TX PD No Longer Responding To 911 Calls For Attempted Theft, Burglary Of Residence, Vehicle Or Business, Theft Or Suspicious Person

Did you ever wonder what post-America would look like?

What happens when civilization has already collapsed, but everyone is still too comfortable to understand what’s happened?

Starting Friday, the Austin Police Department will ask people to use 3-1-1 instead of 9-1-1 to report crimes that are no longer in process, when the suspect is no longer on scene, and there is no immediate threat to life or property.

“What we ask that you do is to report those either over the phone by calling 3-1-1, or by doing it online at ireportaustin.com,” said interim Austin Police Chief Joseph Chacon.

Sworn officers will no longer be responding to those non-emergency calls.

“We will be, in some cases, where possible, dispatching our civilian property crime technicians, for instance, if a piece of evidence needs to be collected. However, that will be somewhat limited based upon the staffing considerations that we have in that area as well,” Chacon said.

All reports gathered by 3-1-1, or online, will still be given to investigators and will be followed up on when detectives are able to do so.

“I feel like, in many areas, not just obviously in our sworn officers on the street, but with our property crime technicians in forensics and in our Austin 3-1-1 call-center, we are experiencing staffing shortages, and, so, I think that I’m going to ask for a little bit of patience. Many times people do have to wait on hold when they’re calling 3-1-1 in order to make that report,” said Chacon.

Calls that will be considered non emergencies include:

“If an officer is not necessarily needed, in other words, this is a crime that obviously has already been committed, and we can still get a property crime technician there to take photos, to be able to gather the evidence and to provide a case number and a way to follow up to a victim of a crime, then that may be the most appropriate way, actually, to handle it so that I can free my officers up to keep answering the emergency calls for service where we have a violent crime and people that are actively engaged in criminal activity,” Chacon said.

The new policy is a result of a recent review of APD’s COVID-19 mitigation protocol, the current staffing shortage, as well as reimagining public safety task force recommendations.

Chacon said, as the department is able to fill empty officer positions, non-emergency response could be reevaluated.

“We’re going to be seeking input into that area from our community stakeholders, from City Council, from community members at large in the coming months to see how they want those police services delivered, and then we’ll be able to determine how many officers we really need,” said Chacon.

Any crime that does not meet all the criteria for a non-emergency will be routed to 9-1-1 and an officer will respond. The chief said if someone is unsure whether a call is an emergency, that person should go ahead and call 9-1-1.

Welcome to post-America America, where calling 9-1-1 to report a crime means invariably that there is a potential for not only disparate impact on the non-white population as engaging in criminal activities, but perpetuating disproportionate arrest records for people of color in the process of trying to eradicate crime.

As long as we fear being called “racist” because too many non-whites are arrested for crime, we don’t deserve civilization.