An Avoidable Tragedy in Arizona 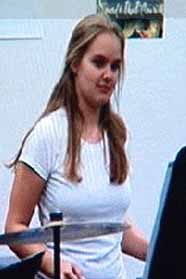 It's incredibly sad to see another innocent kid killed in a traffic crash caused by a drunk-driving illegal alien. Kelly Tracy, a percussionist in Gilbert's Highland High School band, was on her way to a music event with her brother Matthew when she was killed in a head-on by Mexican Manuel Contreras-Galdean, according to police.

MESA, Ariz. (AP) Â —Â  Mesa Police say an illegal immigrant who was driving impaired is responsible for a crash in Mesa that killed a 16-year-old girl who was on her way to a school parade in Gilbert.

According to Mesa Police,Â  the collision was head-on and caused massive head trauma and injuries to both legs of 16 year-old Kelly Tracy. Her brother Matthew Tracy, who was driving, suffered non-life-threatening injuries.
[16 Year-Old Girl Killed on Way to School Parade in Gilbert, Fox Phoenix KSAZ, Nov 16, 2008]

Additionally upsetting is how easily the perp scammed the police last year, convincing them that he was not illegal by his high quality forged documents: Suspect pleaded guilty to drunken driving in '07 [East Valley Tribune, Nov 17, 2008].

A man jailed on suspicion of killing a Highland High School band member in a crash Saturday gave Tempe police no reason to believe he was an illegal immigrant when he was stopped on suspicion of drunken driving almost two years ago.

Tempe police spokesman Sgt. Steve Carbajal said Monday that Manuel Contreras-Galdean gave officers who arrested him Jan. 27, 2007, a local address that matched the address for his car registration, and his Mexican driver's license seemed to also be valid, all signs that he could be here legally.

Carbajal said officers run the risk of racial profiling if they begin inquiring about a person's citizenship without a good reason.

Contreras, who police say was drunk and who was booked on suspicion of manslaughter in connection with the crash that killed Kelly Tracy, 16, Saturday morning, was here illegally in 2007, according to court records.

There are two causes of the avoidable death of Kelly Tracy: first and foremost was the presence of a drunk-driving illegal alien who should have been in Mexico; the other was sloppy police work, apparently due to political correctness, when Tempe officers had him in custody. Most Americans would agree that public safety is more important than avoiding "profiling" drunk drivers.