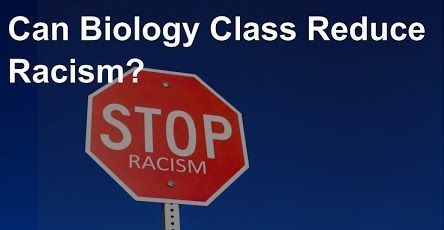 Amy Harmon in NYT: Science Proves the Race Glass Isn't Part Full. Instead, the Concept of Race Is ... Part Empty!

COLORADO SPRINGS — Biology textbooks used in American high schools do not go near the sensitive question of whether genetics can explain why African-Americans are overrepresented as football players and why a disproportionate number of American scientists are white or Asian.

But in a study starting this month, a group of biology teachers from across the country will address it head-on. They are testing the idea that the science classroom may be the best place to provide a buffer against the unfounded genetic rationales for human difference that often become the basis for racial intolerance.

At a recent training in Colorado, the dozen teachers who had volunteered to participate in the experiment acknowledged the challenges of inserting the combustible topic of race and ancestry into straightforward lessons on the 19th-century pea-breeding experiments of Gregor Mendel and the basic function of the strands of DNA coiled in every cell.

… Race, a social concept bound up in culture and family, is not a topic of study in modern human population genetics, which typically uses concepts like “ancestry” or “population” to describe geographic genetic groupings.

For example, well … well … they never use examples of how “ancestry” or “population” is totally different from what the federal government calls race.

But that has not stopped many Americans from believing that genes cause racial groups to have distinct skills, traits and abilities. And among some biology teachers, there has been a growing sense that avoiding any direct mention of race in their genetics curriculum may be backfiring.

“I know it’s threatening,” said Brian Donovan, a science education researcher at the nonprofit BSCS Science Learning who is leading the study. “The thing to remember is that kids are already making sense of race and biology, but with no guidance.” …

Yet there is a rising concern that genetic misconceptions are playing into divisive American attitudes about race.

In a 2018 survey of 721 students from affluent, majority-white high schools, Dr. Donovan found that one in five agreed with statements like “Members of one racial group are more ambitious than members of another racial group because of genetics.”

A similar percentage of white American adults attribute the black-white income gap to genetic differences, according to an estimate by a team of sociologists published this fall. Though rarely acknowledged in debates over affirmative action or polling responses, “belief in genetic causes of racial inequality remains widespread in the United States,” wrote Ann Morning, of New York University, and her colleagues.

Any alternative explanations to the Occam’s Butterknife conspiracy theory of White Privilege must be rooted out by all means necessary.

For his part, Dr. Donovan has argued that grade-school biology classes may offer the only opportunity to dispel unfounded genetic explanations for racial inequality on a mass scale. Middle schools and high schools are the first, and perhaps the only, place that most Americans are taught about genetics.

The new curriculum acknowledges there are minor genetic differences between geographic populations loosely correlated to today’s racial categories. But the unit also conveys what geneticists have reiterated: People inherit their environment and culture with their genes, and it is a daunting task to disentangle them. A key part of the curriculum, Dr. Donovan said, is teaching students to “understand the limits of our knowledge.’’

In contrast, the Theory of Intersectionality is unlimited.

In the pilot study that helped Dr. Donovan secure a research grant from the National Science Foundation, students in eight classrooms exposed to a rudimentary version of the curriculum were less likely than others to endorse statements suggesting that racial groups have defining qualities that are determined by genes. The new study will measure the curriculum’s effect on such attitudes by asking students to fill out surveys before and after the unit. …

For the trainees, from five states and seven school districts, much of the opening morning was devoted to brainstorming how to check in with students, especially black students, who seem defensive or scared, sullen or silent, and how to recognize the unit’s fraught nature.

“Something like ‘These ideas are dangerous, and ‘How do we have a safe conversation about unsafe ideas?’” one teacher said. “But I would have to practice it so I don’t choke up like I am now.’’

Before breaking for lunch, Dr. Donovan, a former middle school science teacher who studied under the Stanford population geneticist Noah Rosenberg while pursuing a science education Ph.D., had a message for them: “If you back out at the end of this,” he said, “I’ll understand.”

The lessons are structured around two fictional teenagers, Robin and Taylor, who both understand that the differences between the DNA in any two people make up about one-tenth of 1 percent of their genome. But they disagree about how those differences intersect with race.

Taylor thinks that there are genetic differences between people but that those differences are not associated with race.

The truth is that neither has a completely accurate view.

As human populations spread around the globe, with people living in relative isolation for millenniums, some differences emerged. But the genetic variation between groups in, say, Africa and Europe are much smaller than the differences within each group.

Taylor, who had downplayed the significance of race, eventually had to admit there were some proportionally small differences between population groups. And Robin had to acknowledge having vastly overemphasized the amount of DNA differences between races.

But the two fictional teenagers still clashed over the opening question. Robin believed that there are genes for athletic or intellectual abilities, and that they are the best explanation for racial disparities in the National Football League and in the worlds of math and science. Taylor said genes had nothing to do with it.

Again, neither was completely right.

In their typical classes, the teachers said, they highlight traits driven by single genes — the texture of peas, or a disease like cystic fibrosis. It is an effective way to convey both how traits are transmitted from one generation to another, and how alterations in DNA can produce striking consequences.

But such traits are relatively rare. In Dr. Donovan’s curriculum, students are taught that thousands of variations in DNA influence a more common trait like height or IQ. Only a small fraction of the trait differences between individuals in the same ancestry group has been linked to particular genes. Unknown factors and the social and physical environment — including health, nutrition, opportunity and deliberate practice — also influence trait development. And students are given data about how racism has produced profoundly different environments for black and white Americans.

For Robin, the lessons said, grasping the complexity of it all made it impossible to argue that there was a gene, or even a few genes, specifically for athletics or intelligence, or that the cumulative effect of many genes could make a definitive difference.

And yet, on whiteboards, teachers listed comments and questions they anticipated from real students, including one that recurred in various forms.

“Isn’t this just a liberal agenda?”

Dr. Donovan told teachers that the curriculum also counters the viewpoint represented by Taylor — that ability is affected only by “how you’re raised, the opportunities you have, the choices you make and the effort you put in.” Recent studies, they are told, show that genetic variants play some role in shaping differences between individuals of the same population group.

Teachers participating in the training said that student beliefs about racial genetic differences at their schools surface in offhand pronouncements about who can dance and who is smart. They also lurk, some suggested, behind the expressions of intolerance that have recently marked many American schools. And what students learn about human genetic variation, teachers said, can lead to misguided conclusions: “They know DNA causes differences in skin color,” said a teacher from Washington State, “and they make the logical jump that DNA causes ‘race.’”

Class time in which to dispel confusion is limited. “It’s always like ‘O.K., but now we’re going to start the lesson on peas,’” said a Kansas teacher. Pent-up curiosity, said one from Indiana, routinely arises in year-end surveys: “I’m wondering if you know any resources where I could learn more about the genetics behind race,” one of her juniors wrote last spring.

Curiosity is the enemy.

… And 21st-century geneticists looking for clues to human evolution and medicine in the DNA of people from around the world took pains to note that they were not studying “race.”

“We basically decided, no, race is still a social construction, it’s not a biological thing,” Ken Miller, an author of the widely used Prentice Hall biology textbook, told the science magazine Undark of the decision to omit mention of race.

Amy Harmon is a national correspondent, covering the intersection of science and society. She has won two Pulitzer Prizes, for her series “The DNA Age”, and as part of a team for the series “How Race Is Lived in America.”

Okay, Amy, so why hasn’t there been a nonblack starting cornerback in the NFL since 2003? What’s the biology teachers’ explanation?

From the reader comments on Harmon’s article in the NYT:

I am a college freshman who participated in this study as a high school senior last year. Dr. Donovan and his team came to my high school and helped teach us the curriculum from this study.

I had mixed feelings after I completed the study. On the positive side, I broke down some important misconceptions I had about “race”. For example, I was unaware of how genetically similar humans were prior to the study.

However, I was not a fan of the curriculum. First, I felt that the curriculum was painfully long and drawn-out for a second-year, AP/IB senior-level biology course. The entire process took about 1-3 months; in reality, I felt that simply being lectured about the topics in 1-2 days would have been plenty sufficient. It’s not like we were taking DNA tests to prove the stated learning outcomes of the curriculum nor were we reading peer-reviewed scientific papers; we were often given large packets that described different claims made by fictional students about race and genetics and asked to evaluate the fictional student’s claim by making diagrams with squares, triangles, and Venn diagrams. In the end, we had a class discussion about the right answers and claims without much discussion about the evidence (as in specific scientific papers). I was not skeptical of the correct claims, but I felt that the “learning outcomes” of each lesson were meant to help us answer the survey better the next time we took it – not necessarily change the fundamental beliefs in the skeptical.