The long-awaited study from Heritage’s Robert Rector calculating the cost to taxpayers of the Senate amnesty bill has been published, and the price tag is steep: $6.3 trillion. When he authored a 2007 investigation of the same topic (Amnesty Will Cost U.S. Taxpayers at Least $2.6 Trillion), there were fewer illegal aliens lined up at the trough and the government was considerably smaller. Rector is a respected expert on welfare use and helped write the 1996 welfare reform legislation. 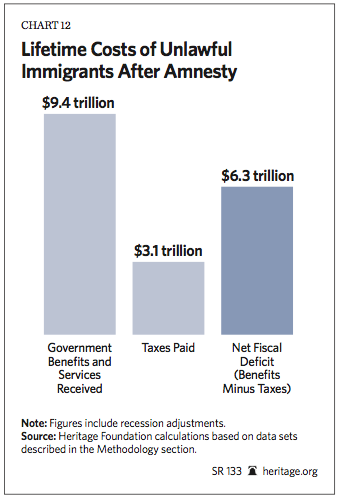 You can read the Executive Summary online, as well as the full report in PDF.

The Senate’s pending immigration bill will trim taxpayer spending on illegal immigrants for a decade, but will explode deficit spending by roughly $1 trillion in each following decade, according to a new analysis by the Heritage Foundation, which opposes the sweeping measure.

The lifetime costs for the 11 million illegals would reach $9.4 trillion, although they would pay roughly $3.1 trillion in taxes. That’s a $6.3 trillion lifetime cost to taxpayers, the report projects.

Without an amnesty, the cost of the “unlawful immigrants” would be $1 trillion over five decades, Robert Rector, Heritage’s forecaster, told reporters May 6.

“Unlawful immigrants on average are tax consumers; they never once generate ‘fiscal surplus’ that can be used to pay for government benefits elsewhere in society,” said the Heritage report.

In contrast, “well educated households tend to be next tax contributors [and] the taxes they pay exceed the direct and means-tested benefits, education, and population-based services they receive,” said the report.

The report only looked at the financial impact of the estimated 11 million illegal immigrants.

The initial drop in expenses is caused by the increased taxes paid by legalized illegal immigrants. The per-household financial drain on American taxpayers would fall to $12,500 per year once the illegals can work legally.

Most of the illegals — and their extended families — are low-skill workers, ensuring they already receive more in federal benefits than they pay in taxes.

Currently, families of illegal immigrants receive roughly $25,000 in benefits and pay roughly $10,000 in various taxes. The cumulative cost of the first decade after amnesty to Americans is roughly $540 billion, although the illegals do provide cheap labor for companies and consumers.

After the first period, lasting form 10 to 13 years, the per-decade cost of the 11 million low-skill immigrants would reach 1 trillion, said the report.