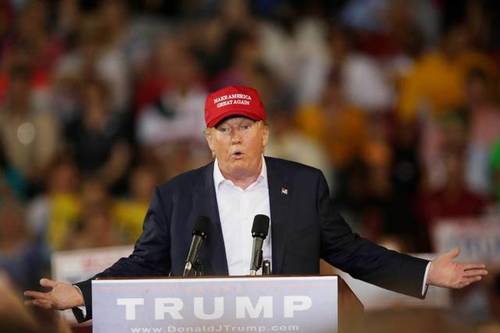 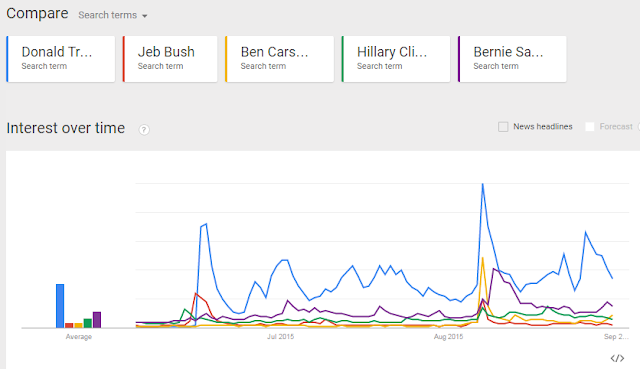 We’re told from as early as elementary school that voting is our civic duty. The Establishment collectively laments low voter turnout. Outfits like Rock the Vote don’t have any specific interest in increasing voter participation rates because the most marginally committed voters tend to vote for the left, of course! No, no, they just want to make sure everybody exercises their civic duty!

Well then, Donald Trump should surely be receiving kudos far and wide for increasing public interest in the 2016 election cycle so much. The [above] graph shows Google search inputs for the five–Google Trends’ maximum number of terms that can be gauged simultaneously–most queried presidential aspirants over the last few months.

This isn’t a measure of news story mentions or opinion polling outcomes, it’s a measure of search terms inputted by Google users across the US. People want to read, hear, and talk about Trump. He creates more interest than the rest of the field by a long shot. On the Republican side, Donald Trump has garnered more searches than the other 15 GOP presidential candidates combined have over the last three months. And it’s not as though there is non-political celebrity noise artificially boosting the apparent level of interest in Trump here, either. As the graph shows, prior to his announcement that he was running, he didn’t generate any search interest at all.

The Republican party is undeservedly fortunate to be able to attach its name to Trump, not the other way around.

Right now, Trump is American democratic citizenship in action. And that’s why he elicits so much hatred from the powerful.