Americas young college graduates are having a hard time finding jobs in the long-lasting recession. Many are saddled with a mountain of debt but few prospects to pay off that burden and get on with their lives. Some even move back into their parents homes.

Gallup pollsters dug up some ugly numbers for April:

A third of U.S. workers under 30 were underemployed in April, according to Gallup.

The 32% of 18- to 29-year-olds last month who were either unemployed or working part time but seeking full-time jobs was up 2 percentage points from March and marks the highest since May 2011. Gallups measurement is not seasonally adjusted.

Yet despite the worst jobs depression since the 1930s for all Americans, Washington continues to admit over a million legal immigrants yearly who compete for scarce employment opportunities.

Not only that, but illegal aliens are becoming more adept at screwing the system to displace citizens in both college slots and employment. Illegals are okay to hire as long as they are treated as independent contractors, lawyers say. 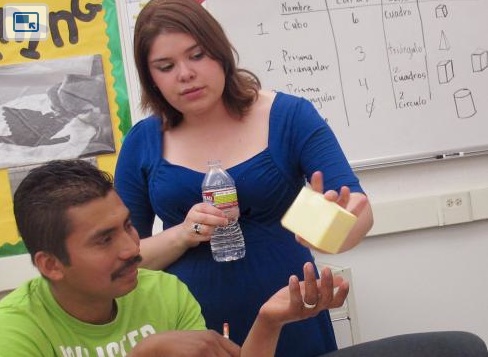 Naturally the dinosaur liberal media thinks that DREAM-y type kiddies scamming for education and American employment makes an upbeat story. Predictably, it never occurs to the reporter that the educated foreigners could work legally in their nation of citizenship. But only everything is enough for the raza demanders! They want the whole American enchilada and they want it now!

Illegal immigrants find paths to college, careers, Associated Press, May 26, 2012
FRESNO, Calif. (AP) – Going to college seemed inconceivable when Adriana Sanchez, the 12-year-old daughter of farm workers, was brought from Mexico to Central California and the family overstayed their visas.

Even though Sanchez excelled in high school, she was in the country illegally, lacked a Social Security number and work permit, and didnt qualify for financial aid. But she volunteered hundreds of hours and paid her way through college and graduate school with a dozen internships.

Now 24, Sanchez graduated last week from California State University, Fresno with a masters degree in International Relations, a full-time job and no loans to repay. Using a gray area in federal law, she works as an independent contractor.

For most undocumented students, you have to put yourself out there. You volunteer, you go beyond what regular students do, Sanchez said. Thats what connects us to opportunities. Now employers call me.

With thousands of young adults who were brought to the U.S. illegally as children now holding college degrees, Sanchez and others are finding creative ways to get around the legal roadblocks and find a career. They are getting work experience, opening businesses and seeking professional licenses in their fields.

The Associated Press interviewed about two dozen such graduates across the country. Some, like many legal graduates, are struggling in a grim economy. But others do highly-skilled work, though not always in their professions. Many are out about their status despite the risk of deportation; a few asked not to be identified for fear it could cost them their jobs or alert immigration authorities.

Theres a pool of talented young people who in their hearts believe theyre American, because theyre raised and educated here, speak fluent English and have a level of education that equals or surpasses that of average Americans, said Roberto Gonzales, a University of Chicago sociology professor who has collected data on hundreds of such young adults. Our colleges dont teach them to be undocumented immigrants.

The growth in young illegal immigrants with college degrees is spurred by demographics — children who crossed the border with their parents are coming of age — and by laws granting illegal immigrants in-state tuition, Gonzales said. Eleven years ago, California and Texas passed such laws, followed by a dozen other states.

No one knows how many illegal immigrants are enrolled in colleges or have graduated; schools dont collect such data. But in 2010, an estimated 96,000 young adults without legal status held at least an associates degree or higher, according to a report from the Migration Policy Institute, a nonpartisan Washington think tank.

What motivated them, Sanchez said, was hope for the passage of federal legislation that would provide a path to citizenship for those who were brought to the U.S. illegally as children and attended college.

But 11 years later, the DREAM Act— the Development, Relief and Education for Alien Minors measure — is in political gridlock.

Some graduates who are here illegally defer going into the workplace by getting another advanced degree, including the Ph.D., according to interviews. Others leave the country. Others work under the table in low wage jobs, still hoping for immigration reform.

But many, like Sanchez — who once dreamed of a career with the U.S. Department of State— are driven to find meaningful work without papers.

Although federal law prohibits employers from knowingly hiring illegal immigrants, it does not require those who hire independent contractors to ask for proof of immigration status. As a result, the client who pays for services is not necessarily breaking the law even if the contractor isnt authorized to work in the United States, said Stephen Yale-Loehr, a law professor at Cornell Law School.

Sanchez consults full-time for a Fresno-area education nonprofit, and teaches literacy and English at an adult school and a domestic violence shelter. But she lives with major frustration. Her parents, who have been crossing the border to work in the fields since the 1970s, are legal residents and her oldest brother is a U.S. citizen through marriage, but it would take years for Sanchez to get a green card through them and pursue her dream of becoming a diplomat.

Im here, I have this education and all these aspirations, she said. I could do so much more, but I cant.

Other illegal immigrant graduates are pursuing professional licenses in fields such as law and nursing.

Courts in California and Florida are considering cases involving two law school graduates who passed their state bars to determine whether they should be allowed to get licenses to practice law in those states. Both graduates are illegally in this country after being brought here as children.

While such legal issues play out, Cesar Vargas — a CUNY School of Law graduate who entered the country illegally when he was 5 years old — passed the New York bar exam and opened a legislative lobbying firm, DRM Capitol Group LLC.

I found out that I can do this and in a legal way, Vargas, 28, said. He recruited several other so-called Dreamers and a U.S. citizen to work with him.

Though he once planned to be a prosecutor, hes now contributing to congressional blogs and planning to open a Dreamers Chamber of Commerce.

Were creating businesses in media, web design and political campaigning, he said. It wasnt by choice, but were challenging the anti-immigration rhetoric that all illegal immigrants steal Americans jobs. Were creating jobs and were hiring U.S. citizens.

Organizations and industry leaders have stepped up to help graduates without legal status start careers. The Dream Resource Center at UCLA places such graduates at job sites throughout the country via its national internship program called Dream Summer.

One option theyre exploring is getting companies to sponsor graduates for H-1B visas, temporary employment visas for specialty occupations. It has been done in a few cases. But its risky; the young person has to leave the country and could be barred from returning for ten years.

Were really looking hard for solutions, Hawkins said. What else can these kids do? They are desperate. They want to work, they want to practice what they learned in college. What do you tell them? Become an undocumented housekeeper? They have advanced degrees.

But critics say those degrees should not mean preferential treatment to legalization.

Despite such sentiments, many graduates have come out publicly about their status and formed a nationwide network through social media, marches and conferences.

Experts say a growing number, like Isabel Castillo of Harrisonburg, Va., who was 6 when she was smuggled into the U.S. from Mexico, have ecome politically active. Castillo, who couldnt use her social work degree from Eastern Mennonite University, waited tables and volunteered with education and immigrant rights groups.

I never thought Id be doing this, its very political, she said. It wasnt part of my interests in college. Now, people are calling me a future congresswoman.