Congress is back in Washington today after a two-week recess, and Senator Sessions hasnt wasted any time in getting back to work. His office posted an informational press release with an illustration showing the coming decades gross number of legal immigrants compared with the combined populations of seven American cities: 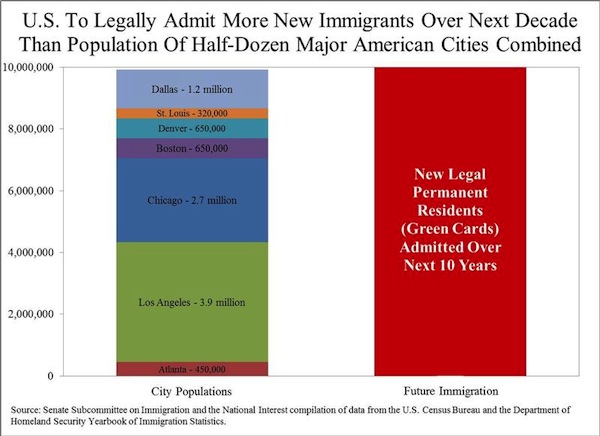 Does America need 10 million additional immigrants? Will they be a net positive or an overall negative?

America faces deep structural problems, including the shrinking middle class, the historic California drought, and the workplace revolution of smart machines making human workers obsolete. The latter item means that the idea of a future labor shortage because of retiring boomers, pushed by some as a reason for increased immigration, is simply wrong.

The Gartner tech consulting company has forecast that one-third of jobs will be done by smart machines by 2025 thats just 10 years from now. A 2013 Oxford University study found that nearly half of US jobs were at risk for automation within 20 years. As a result of radical workplace transformation, America needs ZERO immigrant workers.

Seriously? How much diversity does America need?

Under current federal policy, the U.S. issues “green cards” to about one million new Legal Permanent Residents (LPRs) every single year. For instance, according to the Department of Homeland Security, the U.S. issued 5.25 million green cards in the last five years, for an average of 1.05 million new permanent immigrants annually.

New lifetime immigrants admitted with green cards gain guaranteed legal access to federal benefits, as well as guaranteed work authorization. LPRs can also petition to bring their relatives to the United States, and both the petitioner and the relatives can become naturalized citizens.

In the post-World War II boom decades of the 1950s and 1960s, annual legal admissions were roughly two-thirds lower, averaging together less than 3 million grants of permanent residency per decade—or about 285,000 annually. Moreover, due to a variety of factors, including lower stay rates and stay incentives, the total foreign-born population in the United States actually declined from about 10.3 million in 1950 to 9.7 million in 1960 and 9.6 million in 1970. During this economic period, compensation for American workers nearly doubled. These lower midcentury immigration levels were the product of a federal policy change—after the last period of large-scale immigration that had begun in roughly 1880, President Coolidge argued that a slowing of immigration would benefit both U.S.-born and immigrant-workers: “We want to keep wages and living conditions good for everyone who is now here or who may come here. As a nation, our first duty must be to those who are already our inhabitants, whether native or immigrants. To them we owe an especial and a weighty obligation.” Indeed, recent immigrants are among those most economically impacted by the arrival of large numbers of new workers brought in to compete for the same jobs.

Beginning around 1970, a series of immigration changes (enacted 50 years ago, in 1965) began to take hold. Since that time, the foreign-born population in the United States has increased four-fold to a record 41.3 million in 2013. In some cities, like Los Angeles and New York, about 4 in 10 residents were born outside the United States. Another trend occurred during this period, as reported by the New York Times: “The share of prime-age men — those 25 to 54 years old — who are not working has more than tripled since the late 1960s…since the turn of the century, the share of women without paying jobs has been rising, too.”

Yet the immigration “reform” considered by Congress most recently—the 2013 Senate Gang of Eight immigration bill—would have tripled the number of green cards issued over the next 10 years. Instead of issuing 10 million grants of legal permanent residency, the Gang of Eight proposal would have issued at least 30 million grants of legal permanent residency during the next decade (or more than 3 times the entire population of the state of North Carolina).

Additionally, the U.S. legally issues each year a substantial number of temporary visas which provided opportunities for visa overstays, a major source of illegal immigration. The Census Bureau therefore projects that absent a change in federal policy, net immigration (the difference between the number coming and the number going) will total 14 million by 2025. Not only is the population of foreign-born at a record level, but Census projects that, in just eight years, the percentage of the country that is foreign-born will reach the highest level ever recorded in U.S. history, with more than 1 in 7 residents being foreign-born and, unlike the prior wave, surge towards 1 in 6 and continually upward, setting new records each and every year. In 1970, less than 1 in 21 residents were foreign-born.

According to Gallup: “Fewer than one in four Americans favor increased immigration… More Americans think immigration should be decreased than increased, and by a nearly two-to-one margin.” And a poll from Kellyanne Conway shows by a nearly 10-1 margin Americans think companies should improve wages and conditions for workers already living inside the United States before bringing in new workers from abroad.