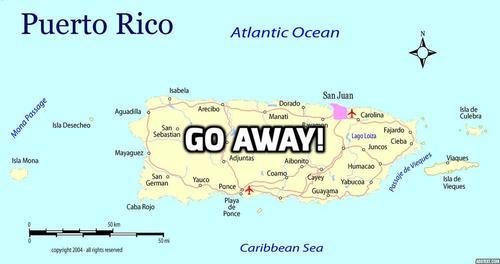 From the NYT, here’s the latest in America’s experiment with Open Borders:

Puerto Rico’s governor, saying he needs to pull the island out of a “death spiral,” has concluded that the commonwealth cannot pay its roughly $72 billion in debts, an admission that will probably have wide-reaching financial repercussions. …

It is a startling admission from the governor of an island of 3.6 million people, which has piled on more municipal bond debt per capita than any American state. …

A broad restructuring by Puerto Rico sets the stage for an unprecedented test of the United States municipal bond market, which cities and states rely on to pay for their most basic needs, like road construction and public hospitals.

That market has already been shaken by municipal bankruptcies in Detroit; Stockton, Calif.; and elsewhere, which undercut assumptions that local governments in the United States would always pay back their debt.

He said that when he took office, he tried to balance the fiscal situation through austerity measures and fresh borrowing. But he saw that the island was caught in a vicious circle where it borrowed to balance the budget, raised the debt and had an even bigger budget deficit the next year.

Residents began leaving for the mainland in droves, and Puerto Rico’s credit was downgraded to junk, making borrowing extremely expensive.

This whole Open Borders thing isn’t really working out, now is it?

If you are interested in historical background, here’s my 2006 VDARE review of Stephen Hunter’s book American Gunfight on how Puerto Rican nationalists almost assassinated Harry Truman in 1950.