In February, I wrote about Amazon’s new “fulfillment centers” that featured increased use of robots: “North Texas: Amazon.com Promotes Its Semi-Automated Warehouses.” Managers assured the public and new local employees that the smart machines “help” humans do the heavy lifting and boring stuff that the workers don’t want to do.

We’ve heard that kind of language before, particularly regarding a dubious “need” for immigrant workers — that they do jobs Americans don’t want to do. It was once the case that workers were paid more for difficult, dangerous or unpleasant jobs, like meatpacking (which once provided middle class jobs for citizens), but no longer. That social contract has been ripped to shreds because of the globalized forces of outsourcing and mass immigration, and smart machines are coming on strong.

These days the Amazon company depends on its amazing Kiva system of warehouse robots to locate and move goods to humans who do the picking and packing.

Now Amazon is sponsoring a contest to be held in May to find a robot that can discern, grasp and pack all sorts of objects. Amazon is looking for the next money-saving automation that will cut labor costs and lessen the company’s need for human workers who require paychecks and lunch breaks.

A search of Youtube for Amazon Picking Challenge, brings up and assortment of application videos like the following: 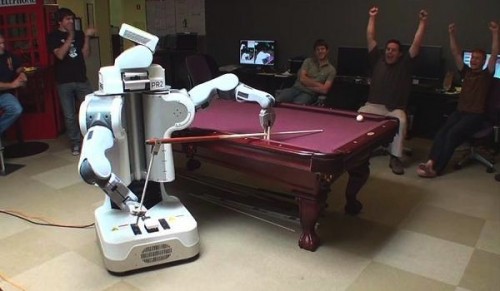 Given the expanded used of computers, robots and automation, America’s future need for immigrant workers is ZERO.

Robots will use the latest computer-vision and machine-learning algorithms to try to perform the work done by humans in vast fulfillment centers.

Packets of Oreos, boxes of crayons, and squeaky dog toys will test the limits of robot vision and manipulation in a competition this May. Amazon is organizing the event to spur the development of more nimble-fingered product-packing machines.

Participating robots will earn points by locating products sitting somewhere on a stack of shelves, retrieving them safely, and then packing them into cardboard shipping boxes. Robots that accidentally crush a cookie or drop a toy will have points deducted. The people whose robots earn the most points will win $25,000.

Amazon has already automated some of the work done in its vast fulfillment centers. Robots in a few locations send shelves laden with products over to human workers who then grab and package them. These mobile robots, made by Kiva Systems, a company that Amazon bought in 2012 for $678 million, reduce the distance human workers have to walk in order to find products. However, no robot can yet pick and pack products with the speed and reliability of a human. Industrial robots that are already widespread in several industries are limited to extremely precise, repetitive work in highly controlled environments.

Pete Wurman, chief technology officer of Kiva Systems, says that about 30 teams from academic departments around the world will take part in the challenge, which will be held at the International Conference on Robotics and Automation in Seattle (ICRA 2015). In each round, robots will be told to pick and pack one of 25 different items from a stack of shelves resembling those found in Amazon’s warehouses. Some teams are developing their own robots, while others are adapting commercially available systems with their own grippers and software.

The challenge facing the robots in Amazon’s contest will be considerable. Humans have a remarkable ability to identify objects, figure out how to manipulate them, and then grasp them with just the right amount of force. This is especially hard for machines to do if an object is unfamiliar, awkwardly shaped, or sitting on a dark shelf with a bunch of other items. In the Amazon contest, the robots will have to work without any remote guidance from their creators.

“We tried to pick out a variety of different products that were representative of our catalogue and that pose different kinds of grasping challenges,” Wurman said. “Like plastic wrap; difficult-to-grab little dog toys; things you don’t want to crush, like the Oreos.”

The video below shows the approach taken by a team at the University of Colorado. The team is using off-the-shelf software and building a robot arm specialized for the task, says Dave Coleman, a PhD student involved.

The contest could offer a way to judge the progress that has been made in the past few years, when some cheaper, safer, and more adaptable robots have emerged (see “How Technology Is Destroying Jobs”) thanks to advances in the technologies underlying machine dexterity. New types of robot manipulators are making machines less ham-handed at picking up fiddly or awkward objects, for example. Several startups are developing robot hands that seek to copy the flexibility and sense of touch found in human digits. Progress in machine learning could help robots perform far more sophisticated object manipulation in coming years.

A key breakthrough in this area came in 2006, when a group of researchers led by Andrew Ng, then at Stanford and now at Baidu, devised a way for robots to work out how to manipulate unfamiliar objects. Instead of writing rules for how to grasp a specific object or shape, the researchers enabled their robot to study thousands of 3-D images and learn to recognize which types of grip would work for different shapes. This allowed it to figure out suitable grips for new objects.

In recent years, robotics researchers have increasingly used a powerful machine-learning approach known as deep learning to improve these capabilities (see “10 Breakthrough Technologies 2013: Deep Learning”). Ashutosh Saxena, a member of Ng’s team at Stanford and now an assistant professor at Cornell University, is using deep learning to train a robot that will take part in the Amazon challenge. He is working with one of his students, Ian Lenz.

While the Amazon challenge might seem simple, Saxena believes it could quickly make an impact in the real world. “If robots are able to handle even the light types of grasping tasks the contest proposes,” he says, “we could actually start to see a lot of robots helping people with different tasks.”