“All Holidays Matter”—Missing The War On Christmas Point

The photo above (via Powerline’s year-end photo roundup) is presumably some kind of troll, but I’m not sure if it’s meant as a War on Christmas troll, or as a BLM troll of  people who say “All Lives Matter”. However, for the record, saying "All Holidays Matter" (i.e. putting up Kwanzaa, Hannukah, and Eid al-Fitr decorations at Christmas-time) is really part of the War On Christmas—one of our earliest articles on the subject, by Tom Piatak, made this point:

I was born in 1964. Of course, my memories of my family Christmases are warm ones. But I also fondly remember the public celebrations of Christmas. In my public elementary school, we made Christmas ornaments and Christmas cards, sang Christmas carols, and ate Christmas cookies. In junior high, our Christmas concert introduced me to more wonderful Christmas music, including a portion of Bach's Christmas Oratorio and Pietro Yon's “Gesu Bambino.” “Merry Christmas” was a universal greeting, Christmas carolers were regular visitors in our neighborhood, and the profusion of decorations adorning all manner of stores left no doubt as to what holiday everyone was celebrating. Local radio stations would air Christmas music throughout December, and the most popular station in town would air nothing but Christmas music from 6:00 P.M. on Christmas Eve until the end of Christmas Day. Television was filled with Christmas specials, and even the most secular shows almost invariably featured workmanlike and even reverent performances of some hallowed carols.

No one I knew was bothered by the effusive celebration of a national holiday observed by the overwhelming majority of Americans. The only concerns of which I was aware were admonitions against the commercialization of Christmas and to “keep Christ in Christmas.”

Such concerns now seem quaint. As Don Feder observed last December, “Today, the challenge is to keep Christmas in Christmas.” We now have “holiday cards,” “holiday parties,” “holiday songs,” and even “holiday trees.” In order to avoid giving offense to anyone anywhere, millions of Americas are now seemingly content to keep quiet about the holiday they do celebrate and to act as if all sorts of other minor festivals—Kwanzaa, Hanukkah, Bodhi Day, Diwali, Ramadan, the winter solstice—are equally important.[More]

The "All Holidays Matter" guy has Christian, Jewish, Muslim, Buddhist, and Shinto symbols, plus one or two I don't recognize.  I think the swastika is meant as representation of the Eastern religion from which the Nazis took it—but anti-Christmas trolls are not above declaring  pro-Christmas activism to be implicitly Nazi. 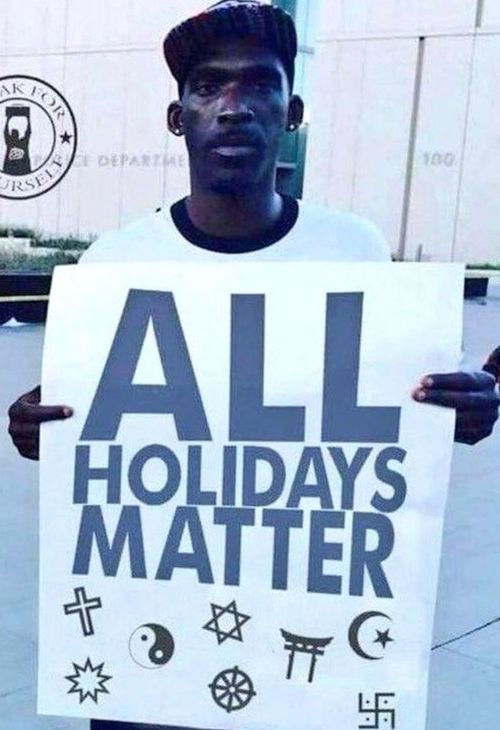