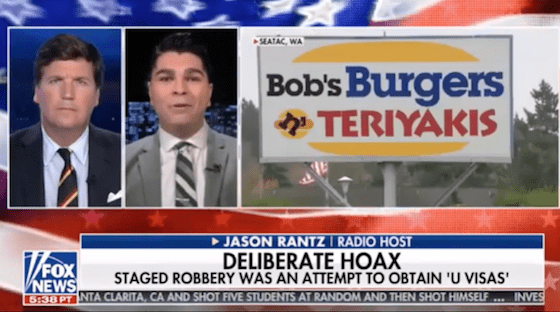 Many of America’s immigration laws are wrong-headed at the core, and arguably one of the worst is the U Visa which allowed foreign crime victims to remain in the United States as long as the offense against them was being investigated.

Naturally, that sort of law is a serious fraud magnet, such as reported here in a 2013 case where an illegal alien in California arranged to have a fake robbery against her so she could remain in the US as a privileged crime victim. 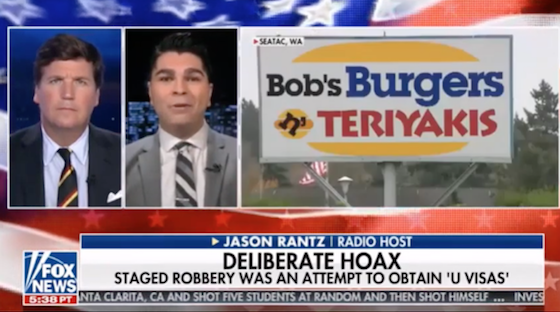 The good news is the fraud was figured out pretty quickly; the bad news is that Washington is a sanctuary state, so the aliens won’t be deported.

TUCKER CARLSON: Well, it’s a story so nuts and unlikely, it can only happen in something like America’s immigration system where crazy things do happen quite a bit.

According to the Sheriff’s Office in King County, Washington — that’s where Seattle is — a group of about 10 immigrants carried out an elaborate fake burglary against themselves, and why did they do that? But one of the many visas that we offer to foreigners is called a non-immigrant visa. It allows a foreigner who was a victim of a crime in the United States to stay in this country for the sake of assisting authorities in solving the crime.

Now, since this crime was fake, of course, the hope was that the case would never be closed and they could stay in this country long term, maybe even forever.

Jason Rantz has been following the story. He’s a Seattle area radio show host and he joins us tonight. So Jason, did I describe that correctly? I mean, you know, it’s almost like out of a movie, this story.

JASON RANTZ: It’s insane and obviously this is a crime that freaked out a whole bunch of people. It happened in SeaTac, it’s right outside of Seattle. We don’t normally see these kinds of robberies, where in this case it was alleged that two men in masks, one with a handgun went into Bob’s Burgers and Teriyaki. It’s this restaurant. They held people up, they tied people up. They sexually assaulted two of the female victims before getting away.

And the story was that some customer wandered in and noticed that this had happened and called 911, and then obviously King County Sheriff’s Deputies took this incredibly seriously. They had a specific description of the two individuals. They had a car and a license plate, and it turns out it was completely a hoax. And they found out pretty quickly that it was a hoax.

And during the investigation they discovered, yes this was, so they thought they would qualify to have a U Visa which says under certain circumstances under certain crimes, you’re protected from being deported because you would have to participate in the actual justice system to go after these bad guys.

Now in theory, when you think you’re not actually going to be deported because there’s not actually a crime, but they think there’s a crime, it means indefinitely they’d be able to stay here.

Now, the ironic part about this story is now that they figured it out, right? They haven’t yet pressed charges, and the expectation is there are going to be some charges. Well, in Washington State, and in King County, and in Seattle, we are sanctuary. We have sanctuary policies, which means even after they are convicted, and let’s say they do some jail time, they’re unlikely to actually be deported anyway, because we will not participate with ICE and we won’t turn them over.

CARLSON: Even though they faked the crime and tied up Seattle area law enforcement trying to solve a crime they that they committed, they won’t be turned over to the Feds for deportation.

RANTZ: They will not be — they can’t be turned over because of our Washington State sanctuary law. It’s absolutely ridiculous and it’s dangerous.

CARLSON: Well, it’s also — it’s masochism, so you can sort of see what’s going on. I mean, there are people who hate our society and are seeking to destroy it obviously.

Jason Rantz, great to see you tonight. Thank you for that — for your explanation.