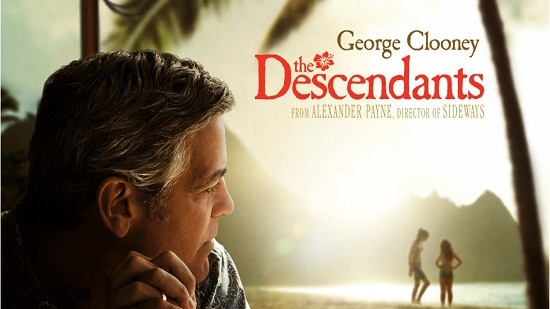 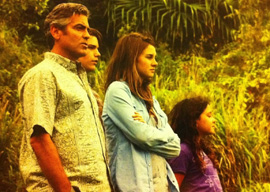 The Descendants, with George Clooney as a Hawaiian land dynasty’s 1/32nd-Polynesian scion, has fans asking where writer-director Alexander Payne has been since 2004’s Sideways, which dispatched Paul Giamatti and Thomas Haden Church on one last trip to the Santa Ynez wine country. ... In Payne’s new dramedy The Descendants, Clooney plays Matt King, the great-great-great-grandson of a 19th-century Hawaiian princess who, rather than marry her brother in the incestuous royal Hawaiian way, eloped with a Yankee businessman. Her numerous, largely blue-eyed progeny hold in trust 40 undeveloped square miles of lovely Kauai.

The Descendants had me wondering: Where has Hawaii been since the 1960s? It’s hard to explain to somebody who wasn’t a kid back then just how large the Fiftieth State loomed. For instance, 1966’s top-grossing movie was an adaptation of James Michener’s Hawaii, with Julie Andrews as a New England Congregationalist missionary disembarking in 1820s Honolulu. ...

Famously, the Protestant preachers came to Hawaii to do good but wound up doing well. They married into the native nobility, then formed an endogamous ruling caste that still controls much of Hawaii’s acreage.

Hawaii's social structure is one of the more interesting in America, as Payne noted in an interview. In particular, it's interesting that the ancestry of the old landed gentry tend to be roughly 1/32nd Native Hawaiian aristocrat, 30/32nd Yankee WASP, and 1/32nd miscellaneous. I hadn't realized that Punahou prep school's earliest generations of elites tended to be WASP-Polynesian hybrids. For some reason, that never came up in Dreams from My Father.

Something similar happened in California under Spanish and Mexican rule. Yankee sailors would jump ship in Santa Barbara and Monterey, start businesses, then marry the daughters of Californio landowners. Rich Californios, however, liked to claim to be pure Castilian, which is different from Hawaii.

Similarly, lots of Southern whites claim to be descended from Princess Pocohontas.

Speaking of part-Hawaiian WASP landowners in a Hawaii, the biggest private holding, Parker Ranch on the Big Island, was left to six year old Richard Smart by his 3/4th Hawaiian great-grandfather who had been the last foreign minister of the Queen of Hawaii. He must have been a charming lad. Dick Smart grew up to be a charming man, starring in Broadway musicals with Carol Channing and Nanette Fabray. But the gay toast of the great white way was an excellent ranch manager back home in Hawaii, too. He leased his worst agricultural land to Laurance Rockefeller for the landmark Mauna Kea resort on the volcanic Kona Coast.