After Such Knowledge, No Forgiveness For Dr. Seuss 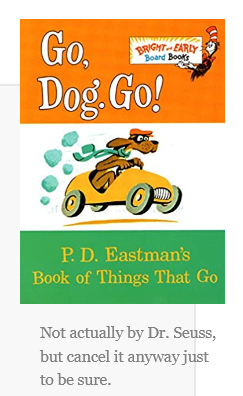 Racism must be exorcised from culture, including, or maybe especially, from children’s culture.

As a child, I was led to believe that Blackness was inferior. And I was not alone. The Black society into which I was born was riddled with these beliefs.

It wasn’t something that most if any would articulate in that way, let alone knowingly propagate. Rather, it was in the air, in the culture. We had been trained in it, bathed in it, acculturated to hate ourselves.

At every turn, at every moment, I was being baptized in the narrative that everything white was right, good, noble and beautiful, and everything Black was the opposite.

But now we know that Black is better than white. Just look at which one gets capitalized!

The first book I ever bought was a children’s book about Job from the Bible. Job was the whitest of white men in the book

“And look how easy he had it.” — iSteve commenter bgates

and so was the white savior with white beard lounging on a cloud. Indeed, every image I saw of Christianity featured white people. My great-uncle had a picture of a stringy-haired, blue-eyed white Jesus hanging over his bed.

Some of the first cartoons I can remember included Pepé Le Pew, who normalized rape culture; Speedy Gonzales, whose friends helped popularize the corrosive stereotype of the drunk and lethargic Mexicans; and Mammy Two Shoes, a heavyset Black maid who spoke in a heavy accent.

Reruns were a fixture in the pre-cable days, so I watched children’s shows like Tarzan, about a half-naked white man in the middle of an African jungle who conquers and tames it and outwits the Black people there, who are all portrayed as primitive, if not savage. I watched the old “Our Gang” (“Little Rascals”) shorts in which the Buckwheat character summoned all the stereotypes of the pickaninny.

And of course, I watched westerns that regularly depicted Native Americans as aggressive, bloodthirsty savages against whom valiant white men were forced to fight.

… About 30 years ago, in my own version of the experiment, I grabbed an old yearbook of from a school I attended whose student body was roughly evenly split between white and Black students. I gave it to my nephew who was 4 or 5 years old and told him to point to the people he thought were pretty. Every face on which that little brown finger landed was white.

It underscored for me that the things that we present children with, believing them innocent, can be highly corrosive and racially vicious.

So, this week when the company that controls the Dr. Seuss books announced that they would no longer publish six of the books because of racist and insensitive imagery, saying “these books portray people in ways that are hurtful and wrong,” I cheered as some bemoaned another victim of so-called “cancel culture.” …

Clearly, the biggest problem faced by African-Americans in 2021 is insufficient self-esteem.