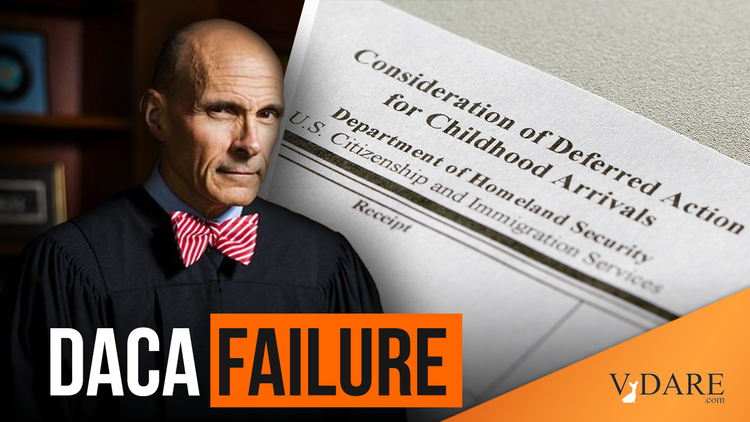 After New Kritarch Attack, Trump Needs To Step Up His Game On DACA

The Trump Administration, probably President Kushner, has decided that they will cave to the illegal alien lobby and continue the Deferred Action For Childhood Arrivals (DACA) program for at least one more round of renewals for the current beneficiaries of the illegal program.

This is another self-inflicted wound for the President politically.  DACA beneficiaries and their partisans will never be voting for him, so why?  In the current crisis of domestic terrorism, this issue has faded away from the consciousness of the average voter open to re-electing President Trump, if there was ever any real concern.

Most likely this continuation of DACA is in response to a kritarch ordering a full restart of the program, including the path to citizenship by DACA recipients, Advanced Parole, where aliens apply for a permit to re-enter the United States, despite the aliens not having a lawfully issued immigrant or non-immigrant visa, before they depart the United States, then use the parole status to apply for legal permanent residency.

First, the kritarch in question, Paul Grimm, who ordered the program to continue in full from before the program was ordered to wind down.  This shows another failure of the Trump Administration; they should have ordered the end of DACA immediately on President Trumps’ Inauguration Day, as promised, with an immediate stop to all benefits and the illegal aliens placed in removal proceedings.

Sadly, the Administration waited until September 2017, then designed the end of DACA to be a “wind down,” rather than an immediate stop.  This obviously showed hesitancy, which the illegal alien lobby calculated it could use as precedent.  If the program was illegal and unconstitutional, why “wind it down” rather than end it? Being generous and kind was used against the Administration.

Instead, the Administration should have announced a new policy of deporting all illegal aliens: That would have obviated the need for any actions under the Administrative Procedure Act (APA) and made this about prosecutorial discretion, which is what Obama originally claimed it was.

Unsurprisingly, Kritarch Paul Grimm is an Obama appointee, but, interestingly for the immigration debate, was born, like the late Olivia de Havilland,  in Japan.

He is obviously neither a Japanese citizen nor Japanese, as Japan does not recognize an accident of birth as being related to being Japanese.

Japan determines Japaneseness by your relationship to your genetic, cultural, and racial make-up.  [Japanese Refuse To Declare Foreigners Born In Japan To Be Japanese Citizens, by Federale, VDare, December 19, 2016]

A federal judge on Friday ordered the government to revive the DACA program as it existed before President Trump tried to phase it out in 2017, which means opening it up to brand new applications.

That’s a key issue that had remained in limbo after last month’s Supreme Court ruling, which found the Trump phaseout cut too many corners.

U.S. District Judge Paul W. Grimm, sitting in Maryland, issued an order restoring all parts of the program back to where they were, which means not only protecting current recipients but also approving new ones.

But, again, the Trump Administration will resist with half measures, which are bound to fail and be exposed as legally faulty.  Again, if the program is illegal, why extend it?  Furthermore, the program was originally designed for two-year periods for the illegal aliens; why go to one year?  It only encourages illegal aliens to hold out for the November elections.  But worst of all, there was no need to extend the program at all.  The Supreme Court decision on the case only said the repeal of the program needed a “notice and comment” period under the APA.  However, there is no need for any procedure under the APA to not take any action. The original DACA program was not continuous, the program required authorizing a continuation of the program by executive action, i.e. a new memorandum to authorize a new period of time for new applicants.  The DACA program could have been ended by doing nothing, and, of course, ignoring or appealing the above kritarch.  The one year renewals are obviously not in compliance with Kritarch Grimm.

President Donald Trump is ordering a comprehensive legal review of the immigration program that allows undocumented immigrants brought to the United States as children to remain, and will consider winding down the policy after a Supreme Court decision left the door open to its cancellation, a senior administration official said on Tuesday.

Trump plans to “limit the scope” of the Deferred Action for Childhood Arrivals program, known as DACA, while that review is underway, the official said…

Renewal applications for deportation protections will still be considered, but only one-year renewals will be provided, rather than the existing two-year renewals, for eligible applicants. And all applications for advanced parole, allowing applicants to travel to and from the United States with immigration applications pending, will be rejected “absent extraordinary circumstances,” the official added.

So, the Trump Administration is only going a little bit Andrew Jackson, not a full Andrew Jackson.  Half measures will get the same result as the original half measure, failure.

A better strategy is to not extend the program, let it die on the vine.  And then to challenge the fundamental basis of the SCOTUS decision, start placing DACA illegal aliens in deportation proceedings.  And to make things tough for the illegal alien advocates, start with DACA illegals who have criminal records.  Remember, applicants for DACA were allowed to have up to three misdemeanor convictions, and more with waivers.  Publicly announce that according to new “prosecutorial discretion” DACA will not apply to any alien with any criminal convictions.  Send Deportation Officers out to arrest all those aliens with three or fewer misdemeanors to make an example of them and as a poke-in-the-eye to Kritarchs John Roberts and Paul Grimm.  There is nothing they can do about the exercise of “prosecutorial discretion,” especially since it goes both ways; to decide to prosecute or not.