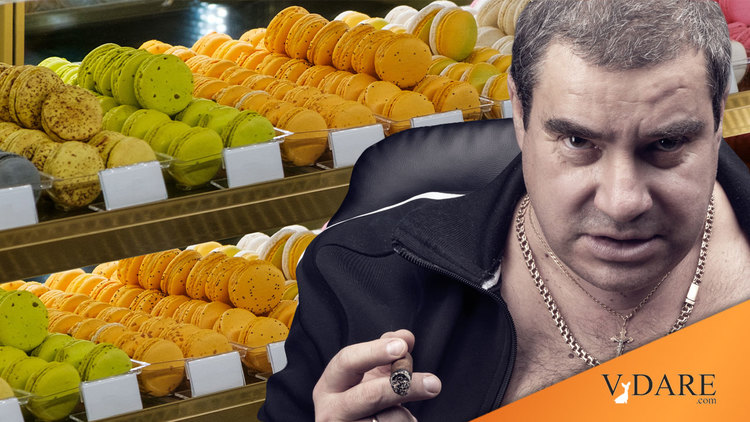 There’s a cookie shop in my neighborhood that appears to be run by Russian gangsters as some kind of front or money laundering operation. There’s nobody in it, no place to sit, no menu sign, just a bakery case of Oreo-sized macaroons. Finally, a Bob Hoskins–looking guy in a wife-beater undershirt comes out from the back room and seems surprised that I’m there.

Man in a wifebeater with a Russian accent: “What do you want?”

Man in a wifebeater with a Russian accent: “Plus tax.”

Steve: “How many cookies do you get for that?”

Man in a wifebeater with a Russian accent: “One. Plus tax.”

Another time I went into a large shop in Encino with a sign that said “Printer Cartridges.” Inside, there was mostly empty floorspace.

Surly man behind the counter: “What?”

Surly man behind the counter: “Sold out.”

One reason Hollywood thrillers have been full of Russian gangsters since the 1990s is that screenwriters tend to start out living in North Hollywood, which has a lot of ominous Russians (and/or Israelis) around. I don’t know exactly what the Russians do, but it’s fun to make up stories about them.

Here’s a pitch: What if the Russian gangster with the fake cookie shop invents a cookie recipe that actually is worth $3.75 PLUS TAX? He could name his cookie The Flathead and start a national cookie chain called Flathead’s. But just when Mr. Flathead thinks he’s out, they pull him back in…