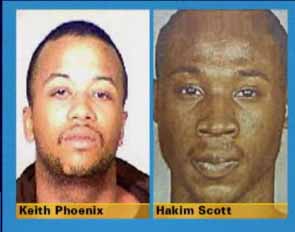 When I wrote in December about the beating death of Ecuadoran immigrant Jose Sucuzhanay, I had to look hard to find a news report that mentioned that the race of the attackers was black: New York Governor Condemns Murder of Ecuadoran.

Two of the accused killers were arrested last week, Hakim Scott on Wednesday and Keith Phoenix on Friday. However, I couldn't find decent mug shots of both until today, and I had to snap that off an online video. Again, one assumes a certain reticence on the part of the media because this widely condemned hate crime did not conform to the MSM's favored narrative of perps being angry white guys. The crime surely does not advance the Rainbow Coalition ideology promoted by Jesse Jackson and extreme diversity enthusiasts.

In addition, some of the rhetoric at the indictment presser was beyond lofty: Suspects In Fatal Brooklyn Beating Indicted On Murder Charges [New York One, March 3, 2009].

Brooklyn District Attorney Charles Hynes unsealed an indictment today against the two men charged in the fatal beating of an Ecuadorian immigrant.

According to the indictment, the Sucuzha?±ay brothers were walking home from a party in Bushwick in the early hours of December 7, 2008, when the two suspects attacked them with a glass bottle and a baseball bat.

The DA says the suspects beat the brothers, who were walking arm-in-arm, because they believed they were homosexuals. The indictment alleges the two suspects shouted anti-gay and anti-Hispanic slurs during the attack. [...]

"The case is a clear message that society simply cannot permit cretins to target for their violent hatred anyone because of sexual orientation, ethnicity, race, religion or gender," said Hynes.

"We will not allow hate in our city," said City Council Speaker Christine Quinn, one of many elected officials and advocates in attendance. "We will not let hate go unchecked."

Hate will no longer be permitted in New York City? Good luck with that.