White celebrities show how moral, cool, and above it all they are by adopting confused looking African children and helping people as far away as possible. Black celebrities show how moral, cool, and with it they are by helping out rioters and protesters, even as they take care to locate their own homes in gated communities surrounded by white millionaires.

This includes a former drug dealer Jay-Z, who pled guilty to stabbing a record executive in 2001. He's obviously  concerned about the problems of over-criminalization.

Rap mogul Jay Z has quietly used his wealth to post bail for people arrested in protests across the United States against police excesses, an author close to him said.

Dream Hampton, a writer and activist who worked with Jay Z on his 2010 memoir "Decoded," made the revelations in a series of messages on Twitter that she later deleted but were reproduced by the hip-hop magazine Complex.

"When we needed money for bail for Baltimore protesters, I... hit Jay up, as I had for Ferguson (and he) wired tens of thousands" of dollars within minutes, read one tweet.

Ethnic resentment is actually cool and praiseworthy, depending on who does it. When billionaires (who sing/rap songs focused on how they are billionaires) engage in such practices, they are actually fighting for social justice.

Race-based religions and race supremacist mythology are also totally awesome, depending on who is doing it. 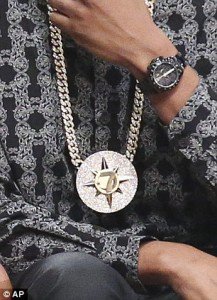 Jay-Z raised eyebrows at the Barclay's Center last week when he wore a medallion symbolizing the Five Percent Nation.

The Brooklyn-born rapper was sitting court-side at a Nets game on Tuesday with wife Beyonce when he was snapped wearing the controversial symbol.

One of the core tenants of the Five Percent Nation - an off-shoot of the Nation of Islam - is that white people are 'wicked and inferior' to black men...

While Five-Percenters don't refer to themselves as Muslims, they borrow their name from the Nation of Islam's idea that five per cent of humanity are 'poor righteous teachers' who are trying to teach the world the truth of existence.

Another 10 per cent know the truth of existence but keep the 85 per cent majority in ignorance by preaching belief in a 'mystery god'.

Jay-Z isn't the only rapper that has taken up the Five Percent cause.