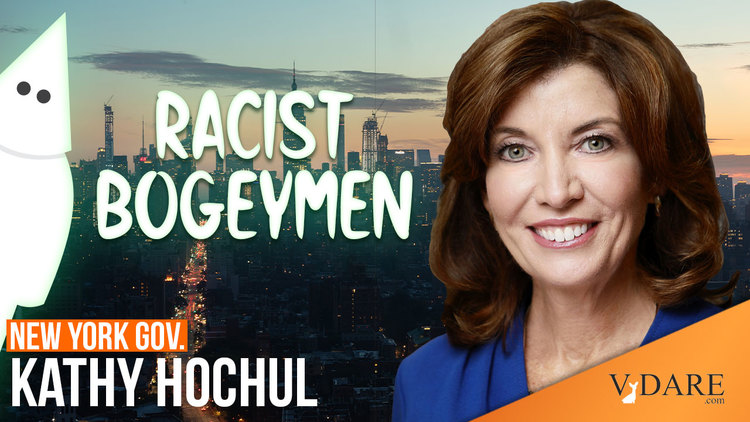 The new policies will collect comprehensive data on marginalized populations.

“For far too long, communities of color in New York have been held back by systemic racism and inequitable treatment,” Hochul said in a statement last week. “I am proud to sign legislation that addresses this crisis head-on, addressing racism, expanding equity, and improving access for all.”

The new slate of laws address the need for comprehensive data collection on victims of violence and specifically Asian Americans and Pacific Islanders communities that have been ravaged by hate crimes throughout the coronavirus pandemic.

Back in the 1990s, the federal Office of Management and Budget used to lump Asian Americans together with Pacific Islanders, but then organizations claiming to represent Pacific Islanders argued, quite reasonably, to the effect that, “We’re mostly big blue collar lugs, not small white collar nerds, so we Pacific Islanders ought to have our own separate category.” The feds agreed and split Asians and Islanders into two separate races on the Census.

But lately I see lots of references once again to AAPIs, lumping the two rather disparate groups back together again. How come?

I think it may have something to do with an old, pre-2000 law setting up AAPI History Month. As you’ll note, the Woke are obsessed with History these days, which in their telling is a litany of white crimes requiring redress unto the 7th generation (or more).

Legislation S.70-A/A.2230 is intended to enact the “hate crimes analysis and review act,” which will create guidelines for the collection and reporting of demographic data concerning hate crime victims and their alleged perpetrators.

Are Samoans being attacked on the streets of New York? Really?

“Our state is meant to be a beacon of diversity, equity, and inclusion, but without the tools to protect our marginalized communities these words carry little truth behind them,” Reyes said in a press release. “The Hate Crimes Analysis and Review Act ensures that we collect accurate demographic data of perpetrators and victims to better protect the communities being targeted. Without data, the plight of many will remain invisible.”

The New York solons haven’t really thought through the perpetrator part of collecting better hate crime stats, have they?

Legislation S.6639-A/A.6896-A will require that the state collect specific demographic information to keep a “more accurate and relevant public record” of Asian-American populations in New York.

Senator Julia Salazar says data collection is important toward acknowledging the needs of certain communities and allowing proper resources to be allocated to them.

“As New York continues to face the devastation caused by the COVID-19 public health crisis, it is essential that the needs of all of our communities be understood and met,” Salazar said in the press release. “For the diverse Asian-American and Pacific Islander communities in New York this cannot be accomplished without detailed data that recognizes and respects the experiences of the numerous groups that make up the AAPI communities.”

What this is about is Shattering the Model Minority Myth by collecting data on each subgroup of Asians so they can show that, say, Cambodians are poorer than whites. Therefore, Cambodians or maybe Asians in general for reasons deserve more affirmative action from whites.

… “Asian-American communities are among the most impoverished in New York,” Niou said.

The ones who are illegal aliens working in sweatshops and restaurants run by their co-nationals from the Old Country, which is the straight white male Americans' fault due to America colonizing China and India.

… The long list of new efforts will also cover inclusivity in health care, expanding the list of conditions that newborns are screened for to include conditions found in newborns from the Middle East, Africa and Southeast Asia.

Because race does not exist. Or does it? Who can keep up?