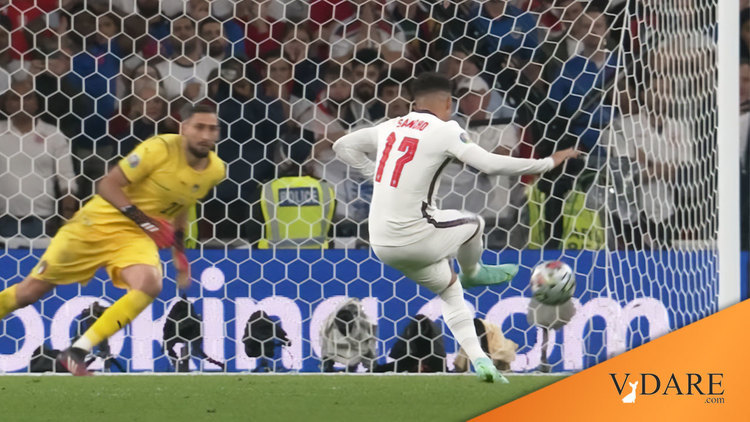 20 Highest Paid Soccer Players By Race: Soccer Is Much Whiter Than American Football

One of the reasons soccer is so globally popular is that it's a pretty white sport, much whiter than American football (the NFL is only about 30% white, even less if you exclude all the white soccer-style placekickers). For example, here is Forbes' current list of the top 20 highest paid soccer players in the world (salary plus endorsements):

3. Zlatan Ibrahimovic, Sweden (Bosnian father and Croatian mother), white (often accused of being a Gypsy by opposing fans, but at 6'5" looks pretty Balkan to me)

12. Franck Ribery, France, white (converted to his Algerian wife's Islam) — face got smashed up in an accident when young, so a little odd-looking.

I'm coming up with the Top 20 being, very roughly, close to 85% white by ancestry, 10% black, and the rest Amerindian or East Asian. Nineteen of the top 20 highest paid players are at least half white.

Back in 2010 I looked through ESPN's list of the world's Top 50 soccer players and came up with fairly similar proportions, a little less white than the 2014 Top 20 highest paid list, but still much whiter than the NBA or NFL, and probably whiter than the MLB.

FIFA could change the rules to make soccer more a test of explosiveness and sprinting ability, like American sports, which tend to favor blacks of West African descent. But, the world seems pretty happy with soccer the way it is.

As I wrote in 2010 before the World Cup semifinals between Uruguay v. Netherlands and Germany v. Spain:

When people go on about how much they love diversity, what they mean is that they want about an 80% white majority and 20% colorful minorities to spice things up, roughly what high level soccer delivers — not the opposite. (But the opposite is what everybody will eventually get.)

Much of the glamor of the World Cup stems from it being a mostly white sport.

Do you think up-and-comers like the South Koreans would be fascinated by the World Cup if it were traditionally dominated by, say, Indonesia, Nigeria, Bangladesh, Ethiopia, Pakistan, and Bolivia? Would SWPLs in the U.S. love soccer if it were associated in their minds with "Kinshasa" rather than with "Barcelona"?

Look at what's happened to interest in track & field over the decades as East Africans have come to dominate the endurance races and the West African diaspora the sprints. (People don't believe me these days when I say that the Olympic running races used to be a really big deal. Who'd ever be interested in people running?)

The rules of soccer could either be more favorable to men of West African descent who are great at sprinting but lack endurance, the way the NFL and the NBA are, by making the game more amenable to sprinters by having more times outs (great for TV commercials) and substitutions. Or soccer could be made more amenable to highlanders with less speed but great endurance such as East Africans, Mexicans, Bolivians, Rif Mountain Northwest Africans and the like by preventing players from wasting time whenever play stops. But the rules are set in such a way that whites predominate in soccer.

And nobody's in a hurry to change.