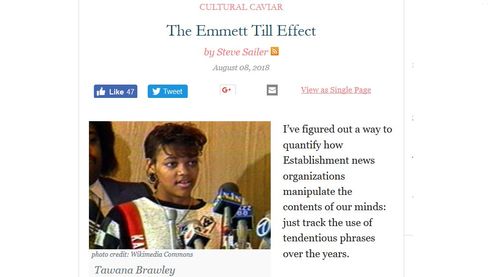 A Tale of Two Teens: Emmett Till vs. Tawana Brawley

My new Taki’s Magazine column, The Emmett Till Effect, explains how to quantify how The Megaphone transmits The Narrative: track year by year how certain text strings in the New York Times have waxed (such as “Emmett Till” and “white privilege”) while others have waned (e.g., “Tawana Brawley” and “Great White Defendant”).

Above is a new graph I made showing how Emmett Till, who was murdered by whites in 1955, is on track to appear in over 90 NYT articles this year. In contrast, Tawana Brawley, who seems to have launched our current age of hate hoaxes in 1987-1988 when Al Sharpton took national her charge that six white cops raped her, hasn’t been mentioned in the Times this year.

Why has the frequency of “Emmett Till” in the New York Times risen from a name referenced annually in the late 20th Century, to one mentioned monthly in the early 21st Century, to the name’s remarkable 2018 status as being as omnipresent in the news (55 mentions so far) as Chief Justice John Roberts (57 mentions)?

The growth of “Emmett Till” has correlated closely (r = 0.88) with the similarly increasing ubiquity of the phrase “white privilege.”

If you ever feel twinges of skepticism about the current stress on “white privilege,” just remember how Emmett Till’s murderers got off due to their white privilege and your doubts will recede.

Post
Where Does The Power Of The Transgender Lobby Come From?